‘Pushing through it’: Vidalia struggles in 48-0 loss 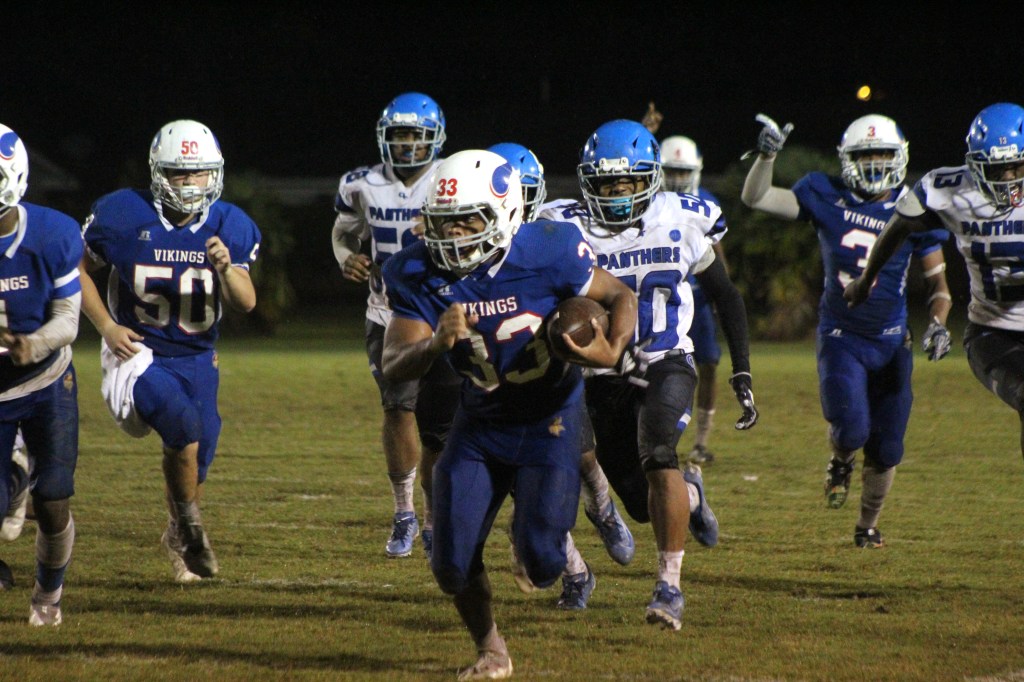 Running back Nickaloes Banks races into the open field to try and put his team in scoring position.. (Hunter Cloud | The Natchez Democrat)

VIDALIA — Vidalia’s game against General Trass got off to a slow start as rain and lightning delayed the kickoff for the game until about 7:30 p.m. on Friday.

Soggy turf limited the mobility of both teams but General Trass pushed their way to a 48-0 win over the Vikings on homecoming night.

Vidalia’s game did start out with promise as they made a huge fourth down stop on defense early in the first quarter. They took the ball over on downs at the 30 and started to march up the field. However, they were forced to punt and both teams struggled to get anything going on offense in the first quarter. The first 12 minutes were scoreless but it took about eight seconds for General Trass to get on the board in the second half.

Faced with third and long, General Trass scored on a 30-yard touchdown pass. A blocked Vidalia punt had set them up with great field position and a short field. The Panthers led 7-0.

Vidalia fumbled the ball inside their 15 and the Panthers recoveredGeneral Trass scored another touchdown to go up 14-0 a couple of plays later. Trass scored again on a one yard rush to go up 20-0. They added another six points on a 40-yard quarterback scramble but could not punch the two-point conversion in and led at half 26-0.

To start the third quarter, Trass scored again on a short bubble screen and converted a two-point conversion to go up 34-0. The Panthers scored on a 15 yard rush to extend their lead to 40-0.

In the fourth quarter, General Trass added another touchdown and two point conversion, General Trass went up 48-0 with 7:35 left. Viking running back Nickaloes Banks was determined to answer as he sprang a 40-yard rush into the Panther’s territory. Vidalia failed to do anything with his excellent run.

Covered in mud from head to toe, bent over as he walked off the field, Banks was an embodiment of the type of attitude head coach Michael Norris wants from his kids. He wants them to keep fighting.

Late in the fourth quarter, Vidalia quarterback Sema’j Hayes suffered a hard hit. Laying on his back, he did not pick himself up like he had the previous times in the game.

As a hush fell over the home side, the General Trass’s football team stood on the field and did not take a knee while coaches and ambulance crews tended to Hayes. He was carried off the field on a stretcher.

“He will be alright, but we will see,” Norris said. “He got hit and landed on his back and said something popped. He was feeling everything and moving fine. We will see what X-rays will determine.”

Banks said it was hard to see Hayes go down with an injury.