‘I love the history of these old houses,’ Vidalia native enjoys construction work with antebellum homes 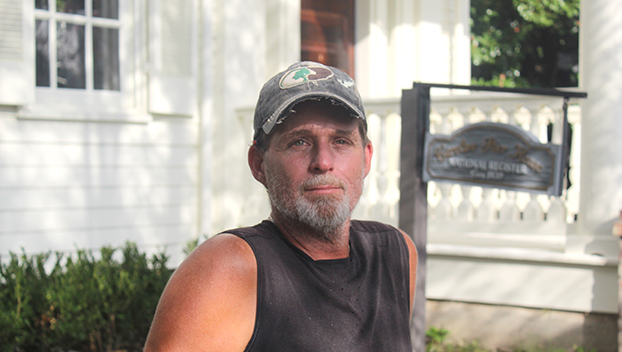 Vidalia native Steven Guillory stands outside of a home he is working on in Natchez. The house is about 200 years old and can be found on Washington Street close to where The Dart landed Wednesday. (Hunter Cloud | The Natchez Democrat)

NATCHEZ — Vidalia native and Natchez resident Steven Guillory leaned against his truck outside a home on Washington Street in Natchez, close to where The Dart landed Wednesday

He was taking a break from construction work and began reflecting on his life’s journey.

“I have left and moved off to Florida and Massachusetts,” Guillory said. “It is like a magnet always brings me right back here. Mostly my family, friends and heritage bring me back.”

As an EMT, Guillory worked shifts where he was on for 24 hours and off for 48 hours. One service he worked for required 48 hours on and 72 hours off, he said.

He said he left the ambulance service after becoming burned out, then went to work offshore as a medic for four years.

“For the most part it wasn’t too bad,”  he said. “I have seen a lot of bad things though. Seemed like everytime we got a bad call, it was a pediatric or elderly abuse (case). I got to where I wasn’t sleeping at night and I faded out from it.”

While off-shift as an EMT, Guillory began working in construction – a job that he said was not as emotionally taxing.

At first, Guillory worked with Danny Smith before he died in August 2020. Now, Guillory owns his own business.

“I like to do trim work and work on antebellum homes,” Guillory said. “(Danny Smith) got me into the older houses. You need to know what you are doing to work on these older homes because they are not perfect and level. I love the history of these houses. This one was floated down the Mississippi River on a barge and put together.”

Antebellum homes are interesting to work on because he can see how carpenters and builders first constructed the home. A lot of the times, Guillory said he will find newspapers in the walls that they used as insulation. One home had posters inside the walls.

Other oddities found inside homes include a rifle and toys, he said. Inside of his truck is a rusty tin toy plane which is missing the wings and wheels.

In his time away from construction work, Guillory said he likes to hunt or fish.

“I like to fish the old river and Lake St. John, Lake Concordia,” Guillory said. “I like to hunt the reserves or wildlife management areas. I don’t hunt as much anymore. I kind of got burned out on that too. I’ve gotten to the age where I like my rest and I can’t be up at 4 a.m. on the weekend walking through the woods to hunt.”

‘I just wanted to help people in need,’ Volunteer…