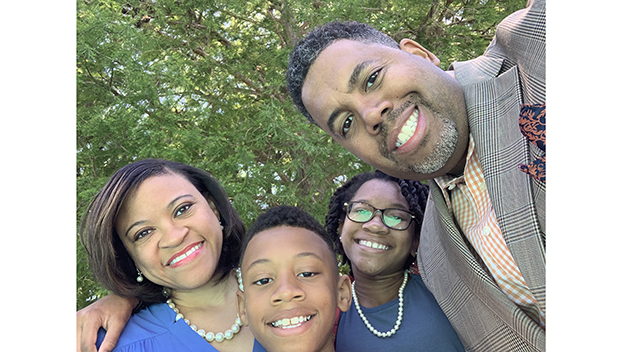 Inniss and his wife Tamika Hoskins Inniss, the granddaughter of Rosie Henderson of Natchez, are the sole owners of New Vision Broadcasting LLC, which closed on purchasing the stations from the Ewing and Nutter families on Sept. 30.

“I’m excited,” said Diana Nutter, whose family has owned and operated WMIS since 1940. Nutter said she was three years old when her father and grandfather first put WMIS on the air. She and her husband Jim Nutter later bought WTYJ off the air and started it back up again in 1986. It was announced last year that the stations would be sold to Gregory Adams, owner of the Wilk-Amite Record newspaper since 2014. However, Nutter said the sale to Adams fell through at the last minute.

“I don’t know how it could be any better,” Nutter said of Inniss becoming the owner of the stations. “I believe the reason it has taken this long to sell was because he was supposed to have it. It’s a God thing. He (Inniss) has been in radio for 25 years and I’m excited to see what he will bring to Natchez radio broadcasting. We thought we’d have to sell Natchez for someone to move here but Malcolm’s wife is from here.”

The stations have historically been “the voice and the ear of the Black community in Natchez,” and are a source of gospel and R&B music and local announcements, she said.

“There was a need for that format and there was a need in the community for urban radio. We hoped strongly we were doing the right thing,” Nutter said. “Selling is a little emotional but is a good emotional. There is no sadness in it. It’s going to a person that I know is going to take it forward.”

During a Thursday ribbon-cutting and Friday welcome reception, Inniss said the Natchez community has welcomed him with open arms.

“I am looking forward to working with the people in and around the city,” he said. “Really, this purchase has been almost two years in the making. I started the process of working with a group of investors. Things fell apart with that group and I was reapproached by Chris Nutter to see if I was still interested.”

Inniss said owning his own communications company has been a dream of his since he was a student at Howard University. From there, he got a job in commercial radio in Tallahassee, Florida and built his career from the ground level up.

“I was the promotions driver, the one who drove the van, poured the sodas and handed out the pizza,” he said. Inniss later moved into sales and marketing positions for various broadcasting stations in Mobile, Alabama, and later in Cincinnati, Ohio. From 2005 until now, he has been the senior account executive and marketing specialist for Urban One / Radio One, in Houston Texas.

Inniss said he learned about the “rich legacy” of the WMIS and WTYJ radio stations in the early 2000s after meeting his wife, who at the time was a nursing student at the University of South Alabama. While in Mobile, Malcolm Inniss was working as the promotions and marketing director with WBLX, WDLT and WGOK radio stations.

“I’m excited for the opportunity to bring my knowledge, skill set and experience to Natchez,” he said. “Our main goal is to be impactful in the community and Inspirational to the children in the region.  My wife and I have been watching the great things happening in Natchez and we want to be a part of the equation. We believe with a positive mindset, effort and community support, these stations will do their part to help move the city forward.”

Inniss said he is also appreciative of the Nutter / Ewing family for providing he and his family with the opportunity to take ownership of WMIS and WTYJ.

“Without Diana, none of this would be happening,” he said. During the transition, Inniss said he will be leaning heavily “on the people who have been working at WMIS and WTYJ, faithfully through the years.”

“I look forward to working with the staff and hearing their ideas on the future of these radio stations,” he said. “We’re taking the next few weeks to evaluate what we’re currently doing.  And develop our game plan for the next chapter of WTYJ and WMIS.  I have a few surprises up my sleeve that we’re excited about but are not ready to announce just yet.”

READY FOR TAKEOFF: Natchez Balloon Festival is next weekend