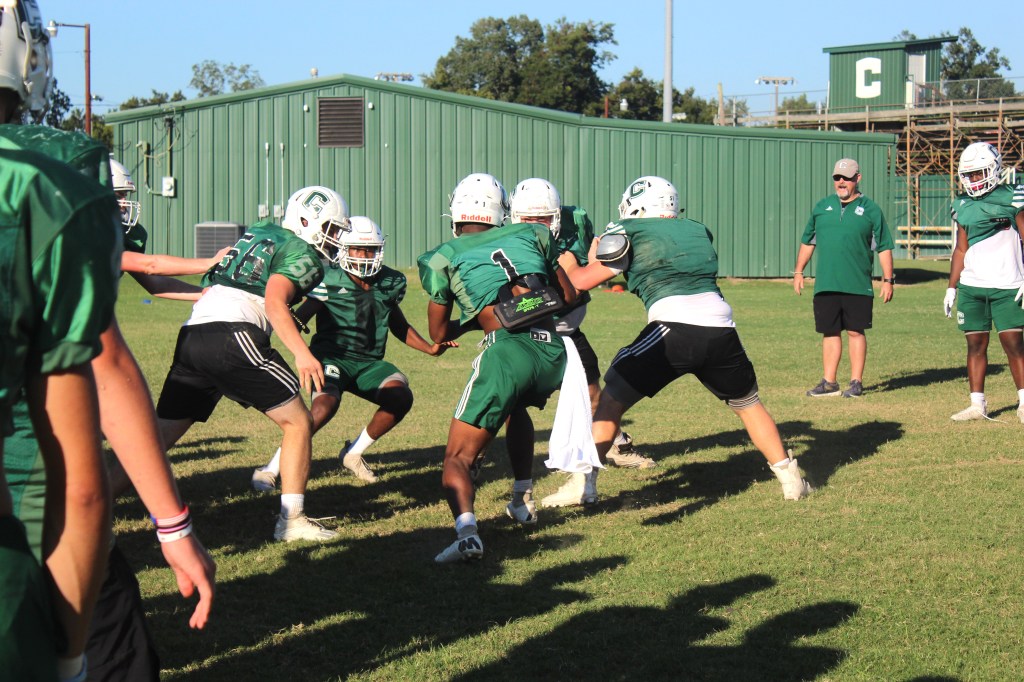 One of the ways Cathedral head coach Chuck Darbonne tried to keep excitement up for his team was running the Oklahoma drill. (Hunter Cloud | The Natchez Democrat)

NATCHEZ — Cathedral did not give up the fight in the second half of last week’s 44-16 loss to Copiah Academy, head coach Chuck Darbonne said. The Green Wave (3-4) hope to carry that fight against Central Hinds Academy (6-1).

He said they will need to have an excited mindset Friday night.

“We need to have the passion for playing football on a Friday night. We had it today in practice. The game is a highly emotional game and we need to bring that from the opening whistle. We try not to make excuses but when it came down to it we didn’t do what we had to last week. We didn’t bring our excitement from the opening kickoff and it showed on the scoreboard,” he said.

He said he wants to get the passing game going consistently all four quarters of the game. Green Wave  have to find connections to all the receivers.

“We have to have some positive things happen early,” Darbonne said. “You have to work full speed when they are healthy in practice. Work on timing. Timing when it gets thrown off or pressure it is hard to find consistency in the passing game. We have done a good job of pass blocking this year. Noah has done a good job of navigating the pocket and finding guys down field. This is one of the more consistent throwing attacks I’ve had. It’s because of their hard work this summer and during the season.”

The district matchup could be crucial as the Green Wave are in fifth place with a game in hand. Any team who can get to 3-1 in district play would feel comfortable for the playoffs, he said.

“A win right here puts us back in contention to host a game,” Darbonne said. “It doesn’t matter who we beat, each win counts. They all matter. Being 3-1 in district is important but we have to go week by week. We want to be 1-0 at the end of this Friday.”

Trojans need to play their brand of football against…