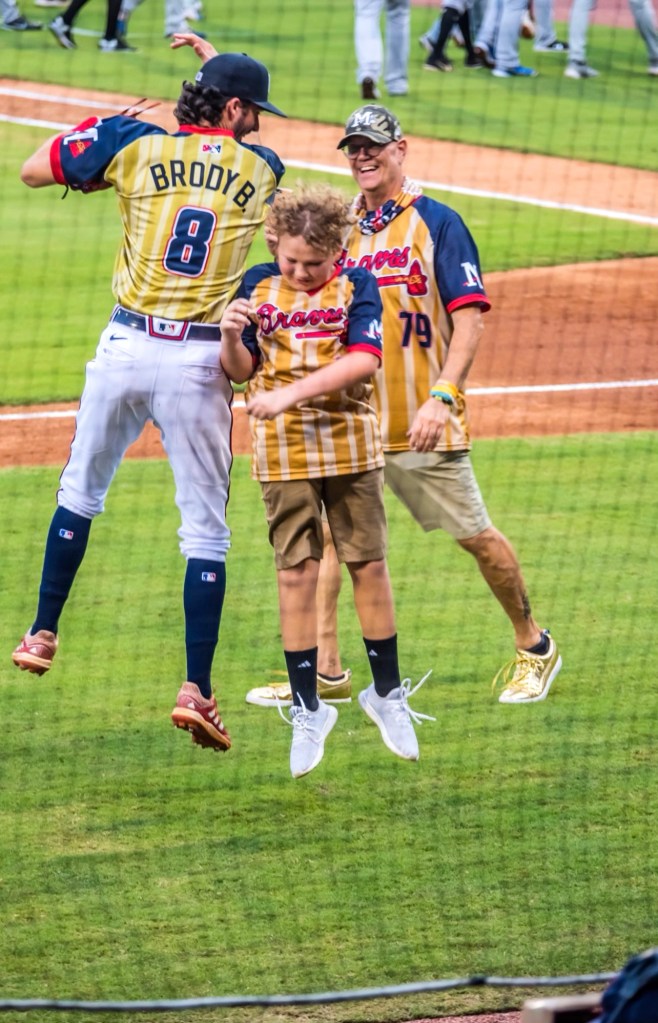 Brody was represented by Mississippi Braves shortstop Braden Shewmake at the Golden Glove Charity game. He got to meet and interact with the player. (Submitted Photo | Ron Bequette)

He had just turned 4 years old. Doctors gave him a 35% chance to live. It was devastating seeing him miss out on activities.

While there is no remission for the cancer, Brody was considered to not have any evidence of the disease in 2014. In 2019, he was completely cancer free.

Now, he is taking the field with Adams County Christian School’s AYA team. Brody is in the sixth grade.

“It has been a surprise to us,” Davis said. “It brightens my day to watch him run and play. He had to learn how to do it all again.”

The cancer slowed Brody down a little bit. Now, he is trying to play multiple sports with ACCS. At home, he often plays baseball and football with his older brother Landon Davis.

The AYA season is underway and Brody is wearing number 25 on the field. His mom will sit in the stands and watch him play. She said she is usually a nervous wreck watching him play football.

Last year, Brody played and this year he begged and pleaded to play again. Davis said he loves football. Her nerves come from not knowing what could happen to her son.

“You never know when they are going to get hit,” Crystal said. “It makes my day just watching him though. We were told he may not make it, and seeing him overcome those obstacles is special and touching.”

During Brody’s cancer treatment, he and his dad were able to go to Monroe and hang out with the Duck Dynasty stars. They also had a hangout with former saints running back Deuce McAllister and created other memories together.

Crystal said one of her fondest memories with Brody was going on a trip to Disney World. It was his first time on an airplane.

Sports are a way Brody’s parents bond with him.  For two years, Brody has traveled to Pearl for the Golden Glove Charity game hosted by the Mississippi Braves – once with his mother and once with his father.

“Anytime a kid, and us parents, go through something like that, we try to make every experience count,” Ron said. “I think the Braves event was a good one. Just seeing the excitement on his face. There were several kids who had beaten cancer or were still fighting that were there. Players interact with the kids and the players wear the kid’s name on the back of their jerseys. It was just a good experience.”

Another great experience Brody and his dad shared was a hunting trip. Jimmy Allgood with Redneck Adventures took them on a hunt at Rifle Point Hunting Club in Louisiana. Brody killed an eight point, Ron said.

He said this journey has taught him to believe everything happens for a reason.

“We had thousands of people following his story,” Ron said. “A lot of people followed him in the community and raised awareness in the area for childhood cancer. It is crazy too because I had never heard of Batson’s. It is the only children’s hospital in Jackson. We had no idea about it before we started this journey.”