ACCS rallies late to upset Tri-County on the road 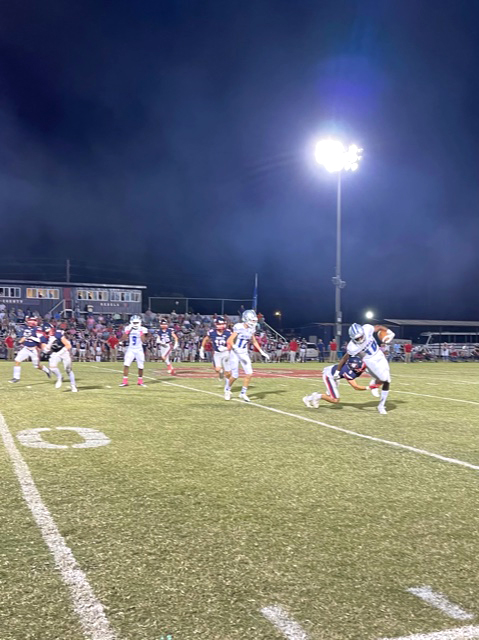 FLORA — The Adams County Christian School Rebels marched 95 yards down the field in about eight minutes, capped off by Coleman Carter’s 10-yard touchdown pass to Colin Cauthen on 4th and 8 with 43 seconds left, as they stunned the Tri-County Academy Rebels 19-18 Friday night in an MAIS District 3-4A showdown.

“Two great teams getting after it. They were outstanding. Our assistant coaches got them ready. They players had intestinal fortitude uncommon in 17-year-olds,” King said.

In a battle of two of the top three teams in MAIS Class 4A — ACCS entered this game ranked No. 3 while Tri-County was undefeated and ranked No. 1 — it looked like the host Rebels were on their way to victory after Thomas Murphy’s two-yard touchdown run gave them an 18-6 with 9:47 to go in the ball game.

But DK McGruder, a transfer from Natchez High School, returned the ensuing kickoff 67 yards for a touchdown just 13 seconds later. ACCS went for the two-point conversion, but J.J. Claiborne was stopped short by Tri-County’s defense.

After a good punt by TCA ended up stopping at the ACCS 5-yard line, the visiting Rebels methodically drove down the field, getting key 3rd– and 4th-down conversions to keep the drive alive. After the game-tying touchdown, Samuel Merriett made the extra point to give the visiting Rebels a one-point lead.

“Everybody did what was asked of them. We went 95 yards on the No. 1 team in the state. We converted two fourth-downs. You can’t have boys out there doing that. You have to have men. We had men out there tonight,” King said. “It was a team effort.”

Then it was up to ACCS’s defense to make one final stand. And it did just that. Connor Aplin’s interception of a Rouse Boyce as time expired put the exclamation point on its comeback win.

After a scoreless first quarter, Carter connected with Merriett on a 19-yard touchdown pass with 8:13 to go in the second quarter for a 6-0 ACCS lead.

However, it did not take long for Tri-Count (7-1, 1-1) to respond. Kamp Shepherd returned the ensuing kickoff for a touchdown to make it a 6-6 game. Trace Dearman scored on a three-yard run with eight seconds left until halftime to give TCA a 12-6 lead at the half.

“We missed a couple of early touchdowns. But we settled down and went toe to toe with them the rest of the way,” King said.

Carter completed eight of 19 passes for 105 yards and two touchdowns. He also had eight carries for 28 yards. Claiborne had 13 carries for 35 yards while Jamar Kaho led ACCS in rushing with 64 yards on eight carries and in receiving with 37 yards on two catches.

ACCS (6-2, 3-0) steps out of district play this Friday when it hosts Park Place Christian Academy for Senior Night. Kickoff is scheduled for 7 p.m.