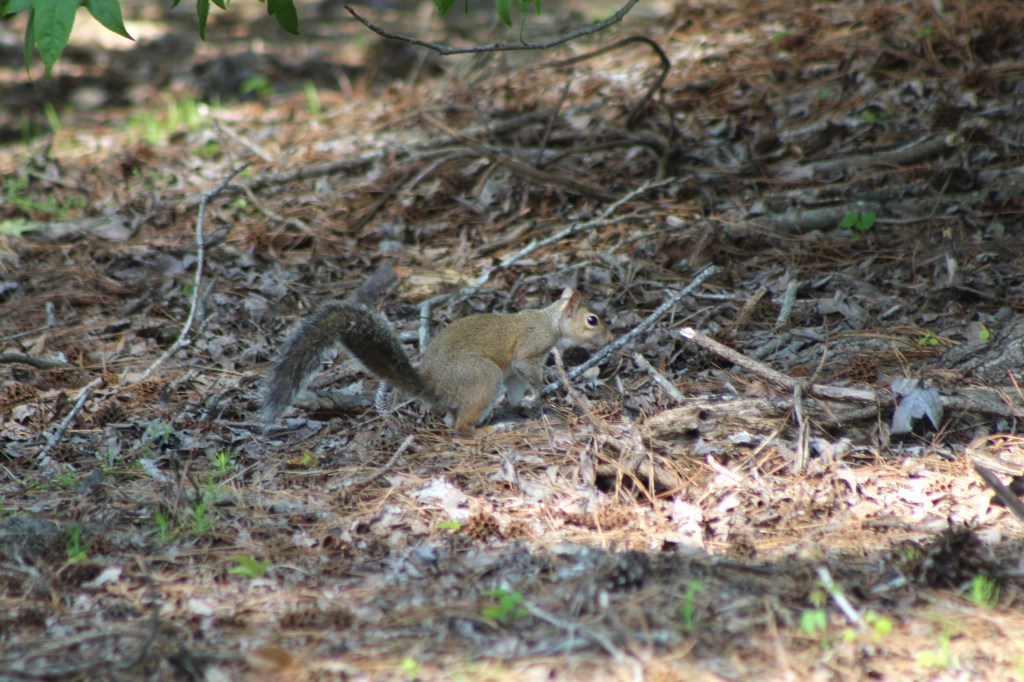 Squirrel harvests are typically forecasted by the mast crop. Due to regional and even tracts of land differences, it can be hard to estimate how squirrel season will go for hunters. (Hunter Cloud | The Natchez Democrat)

His father was a wildlife biologist so the career was something he was familiar with. In 2007, he joined the MDWFP.

“There was nothing else I wanted to do. I grew up having knowledge of it,” Hamrick said. “Additionally, I grew up in a rural area and was an outdoorsy kid. I loved squirrel hunting as a kid. I enjoyed my graduate work with a quail project at the University of Georgia. Naturally, I gravitated to the small game side of wildlife biology.”

Small game season kicks off Oct. 1 with squirrel season. Each year it is a guessing game as to how the squirrel season will go.Trees begin to shed their leaves and nut crops as October rolls around. He said he is starting to see squirrels start to get active.

Typically, there is a lull in squirrel observations in the summer because of their late summer breeding period and in the heat they are not as active. Looking at the acorn, pecans, walnuts and pine cone crop is one way to forecast the squirrel season, he said.

“You should look for what the mast crops should be. It is starting to get to where we can tell what it might be like,” Hamrick said. “I think the mast crop was sporadic last year. A lot of times we have to guess. Mast crop carries them through the winter so that has an impact on squirrels. I think last year we had a bad year compared to the year or two prior.”

It takes a few weeks of the hunting season to get an estimate on the squirrel population, even then it is a little bit of a speculation. Harvest numbers are tied to the nut crops. Pine seed is another food source often overlooked, he said.

Once upon a time, Mississippi had three zones with different squirrel season start dates, he said.

“It was brought about based on the cycles of bat fly larvae,” Hamrick said. “They are under the skin parasites of squirrels and rabbits. It causes a little swelling. The zoning was an intent to minimize the spread in squirrels. They generally don’t hurt the squirrels, but it was an attempt to reduce the occurrence of when those larvae were noticeable.”

About a decade ago, MDWFP switched to a statewide start date. He said people in different zones in Mississippi would ask why one would start sooner than another. They stuck with North Mississippi’s start date of Oct. 1. Rabbit season starts Oct. 16 because of statute, he said.

“For the most part most squirrels are out of the nest by October,” Hamrick said. “We want to minimize any reproductive negative effects. Rabbits have their date set in legislative statutes. I tried to suggest they change it to run concurrently with squirrel season. It is just a legislative process. For now, rabbits have their own day.”

He said he could not recommend a specific number of squirrels hunters should harvest on their property. In part, this is due to the diverse landscape in Mississippi and other factors which impact properties.

Generally, he said there is no specific evidence which suggests over harvests of gray squirrels are a concern. Hunters can reduce the numbers of a squirrel population in a confined area, he said.

“Their activities change throughout the year, and we haven’t seen where harvest has impacted a population,” Hamrick said. “There is enough forest to cover most of the state where you are going to have connected populations. As you remove individuals you create opportunities for others to move in. There is not a lot to suggest that harvest has a detrimental effect on their numbers.”

There is an exception. Harvests might have a different impact on fox squirrels due to the loss of their habitat quality, he said. Fox squirrels prefer open conditions favored by agriculture. In the prairie, they utilize corn and oak trees along field edges. They are more comfortable in the open, he said. However, dense pine plantations are not as favorable to fox squirrels.

People have a couple of choices when hunting rabbits. He said the majority of people who are serious about rabbit hunting use dogs, but if you do not have a dog you can walk rabbits up out of their hiding spots in fields.

Mid-October offers a great opportunity for hunters to harvest both rabbits and squirrels in the same hunt.

While hunting rabbits, it’s important to find their preferred cover of brush and blackberry patches. A management tactic people could try is to pile up brush with down limbs to give them a place to hide between the times they are feeding.

“It’s a challenge if you are looking for something challenging,” Hamrick said. “Practice safety. Know where you are shooting. If you are with other people you want to be mindful of safety.”

Small game is not limited to just rabbits and squirrels. Quail, snipe and woodcock are small game species hunters can pursue during the fall.

“There is some renewed interest in small game,” Hamrick said. “Hopefully young people can manage land for quail and other small game species.”