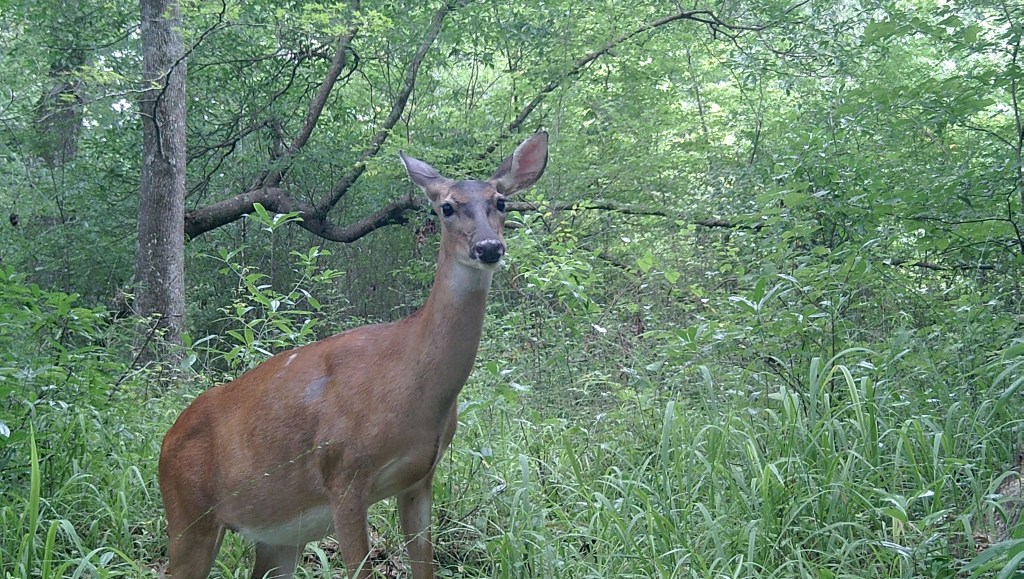 This doe was captured on a trail cam in Lincoln County. (Hunter Cloud | The Natchez Democrat)

JACKSON — William McKinley is the Mississippi Department of Wildlife Fisheries and Parks Deer Program Coordinator, and he has worked with white-tail deer for 20 years. He said there are several things hunters believe about deer which do not have any merit.

He said Mississippi State University, one of the best deer research universities, has worked to dispel myths about deer with scientific research. MDWFP has a close partnership with MSU’s deer program. He said they lean heavily on them as researchers in Mississippi.

One of the common misconceptions is about how deer perceive color. McKinley said hunters believe deer are colorblind, but this is not the case. Instead, deer see different spectrums of light than a human does.

“Blue stands out like a beacon to them, and orange blends in with green,” McKinley said. “I laugh whenever I see someone who says they are not going to wear safety orange while hunting and they are wearing Camo with blue jeans. The only thing blue in nature is an eastern bluebird and a blue jay.”

Deer see just as poorly as humans do in low light situations such as late evening and early morning, Mckinley said. Deer can pick up movement in the woods and the dark.

He said if a person moves through an area in the dark, the deer can still see the person because they have good night vision. Additionally, deer can pick up on flashlights used by hunters as they walk to their stands or blinds, but hunters should continue to use them.

When a flashlight catches the tapetum lucidum, that part of the eye that reflects the light, will give off a yellowish glow. The eyes of owls and dogs can do the same thing.

Deer can not see in complete darkness. They make better use of light from the moon and stars to see than humans can. If you shine a flashlight in a deer’s eyes in the dark, they can not see anything, he said.

“The old adage about deer in the headlights is true, it blinds them,” McKinley said. “They become blind and are stunned. Their perception is lost. It is almost mesmerizing to them.”

Another common misconception about deer is how they use the wind to smell danger. He said if a deer always walked with the wind in its face, the deer would be in Canada by the end of winter. Deer do not have to walk trails based on wind direction, however, they use wind when approaching dangerous areas such as food plots or bedding areas.

“Before they approach an area of danger, they are going to circle it and get downwind of it,” McKinley said. “A lot of times when you see a deer enter a food plot downwind, you are just seeing the end of the trail. Bucks circle a field for two things. Danger and does. In hunting, you are better off on the downwind side. The best way to outsmart a deer’s nose is to stay downwind of him.”

He said people think rattling does not work in Mississippi because they don’t see the deer when they do it. However, he said deer circle about 100 yards downwind of a hunter, and he may never know the buck is there.

McKinley said a hunter should safely have a buddy sit 75 or 80 yards downwind to have more success while rattling. The best time of year to rattle is just before the peak rut.

MDWFP can determine when does breed through health checks in cooperative areas. It is how they come up with the rut forecast for the state, he said. The rut is a term for the entire breeding cycle of deer.

“Individual does are in estrus for about 36 hours; however, in a particular area, does are coming into estrus over a six week period,” McKinley said. “There is a 2-week peak with stragglers on both ends. For example, in Madison County, the peak date of estrus is December 31 to January 1. Some start December 5, and others start the first week of February.”

In the north, extreme winters make a more defined rut. In the south, it is not nearly as defined. He said Florida has 10 months of the year where deer can breed.

Deer go into rut every year, and it is typically around the same time, he said. However, if the weather is hot during the rut, then there will be less movement.

Food and the urge to breed are the two factors that drive deer movement, he said. From his observation, trees look to have an abundant acorn crop, persimmon trees are filled with fruit, and the woods have a lot of browse due to the rain.

Abundant food sources mean observations may be lower this year, but the quality of deer harvested should be good. He said there have not been any stress periods for the deer either.

Temperature is another factor in deer movement. He said if it is too hot then deer become lethargic and do not move. In hot weather, deer will bed down in shady areas. Additionally, deer do not move much in extremely cold temperatures, like the blizzard this past year.

“Deer will slow their heart rate and breathing rates to bed down where they have thermal protection in brush top or cedar trees,” McKinley said. “They will lay in a stupor state to conserve heat. After 2-3 days they have to move. If you go hunting in an unseasonably cold snap, likely all you are going to get is a cold. (There are always exceptions). You need to wait for the sun to warm things up. Extreme cold doesn’t drive deer movement until it’s prolonged. If it feels good to you, then it feels good to the deer.”

In 2016, the winter was so warm people could go swimming on Christmas, he said. This abnormally warm weather caused deer to not move. It made observations go down, he said.

“I received more complaints from hunters who claimed our deer population had fallen.,” McKinley said.

In reality, the deer population has not fallen. While the MDWFP can not count every single deer alive in Mississippi. They can estimate deer populations using harvest data and back data. They use data collected from the Deer Management Assistance Program to determine the population status.

“We use total harvest from state harvest data to estimate the age structure,” McKinley said. “We then go backwards and determine how many deer were in the herd back then. The population has not gone down, but it has remained level.”