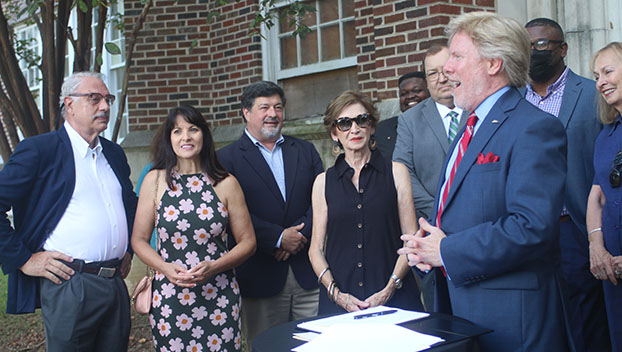 NATCHEZ — The City of Natchez officially closed on the sale of the former Margaret Martin School building Tuesday afternoon to the owners of Dunleith, which include Joseph Jaeger of the J Collection in New Orleans and Michael Blattner of Natchez.

The sale price of the building was $105,000, which was the average of two appraisals sought on the property, said Natchez Mayor Dan Gibson.

John Holyoak, Dunleith general manager, said specific plans for Margaret Martin have yet to be finalized, but now that the sale is complete and they have the building in hand, work can begin on how to use the space.

The sale includes 4.213 acres and all buildings on the property, as well as the Margaret Martin building.

Some ideas mentioned for the Margaret Martin building include additional hotel rooms for guests, perhaps a cooking school, a spa facility and event and meeting space.

Gibson said the new owners of Margaret Martin plan to spend “millions” of dollars on renovations.

“The beauty of it is that Margaret Martin is a historic landmark, so everything they do will be in concert with the Mississippi Department of Archives and History,” he said. “The end result is going to be an absolutely beautiful facility.”

When taking the photo after the closing signing of documents, Gibson said, “Everybody say jobs!

“In reality, this is going to become a major venue in the city,” he said.

Gibson thanked the members of the Natchez Festival of Music for the care they took of the building for 31 years.

“They helped carry that building. For many years, they were the one who kept the lights on. They raised thousands and thousands of dollars to keep that building functional.”