‘I LOVE HIM’ Dinosaur surprise highlight of birthday party 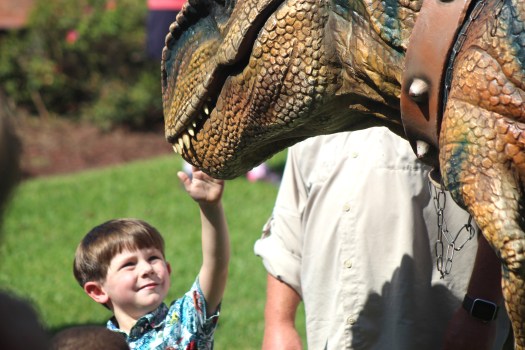 John Graham Laukhuff pets a dinosaur on the Natchez Bluff. His mom Sarah Lindsey Laukhuff hired a dinosaur to surprise him for his birthday. He turned five and loves dinosaurs. A T-Rex is his favorite dinosaur. (Hunter Cloud | The Natchez Democrat) 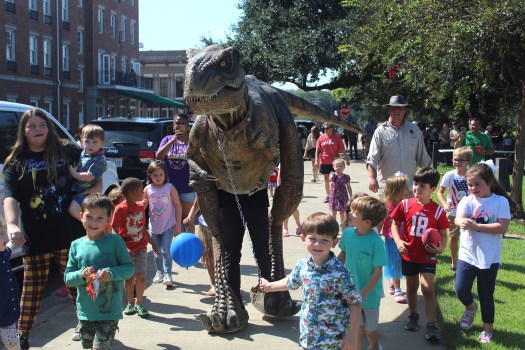 John Graham Laukhuff leads the dinosaur on a walk down the sidewalk with dozens of kids following. They were there to celebrate his birthday. (Hunter Cloud | The Natchez Democrat) 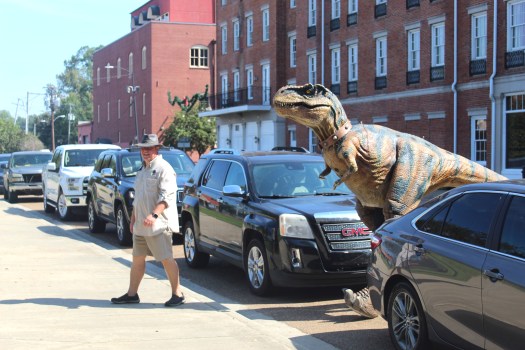 The dinosaur was led across the street from the Grand Hotel to the sounds of children screaming with either delight or fright Saturday morning. (Hunter Cloud | The Natchez Democrat)

NATCHEZ – An animatronic dinosaur walked out of the doors to the Grand Hotel in Natchez as dozens of children screamed with excitement on Saturday morning.

If birthday parties were not exciting enough, John Graham Laukhuff got to pet and walk a dinosaur as he celebrated turning five with a party on the Natchez Bluff. His mom Sarah Lindsey Laukhuff said she got the idea on her way to the Natchez Market.

“I saw them coming down the highway from I’m guessing Catahoula Parish …,” Laukhuff said. “I saw the trailer and it said the Dinosaur experience. I could not get to my phone quick enough and see how I could make it happen.”

She said her son really loves dinosaurs, a fact confirmed by his shirt covered in a dinosaur pattern. He said his favorite is the Tyrannosaurus Rex. I

And, he loved the surprise of having the dinosaur at his birthday party.

“I love him 20, 40 thousand 60,” John Graham said. “My favorite part was when he put the balloon down and it popped. It has been my favorite birthday. I love the dinosaur because it was so giant and he was nice. He was not scary.”