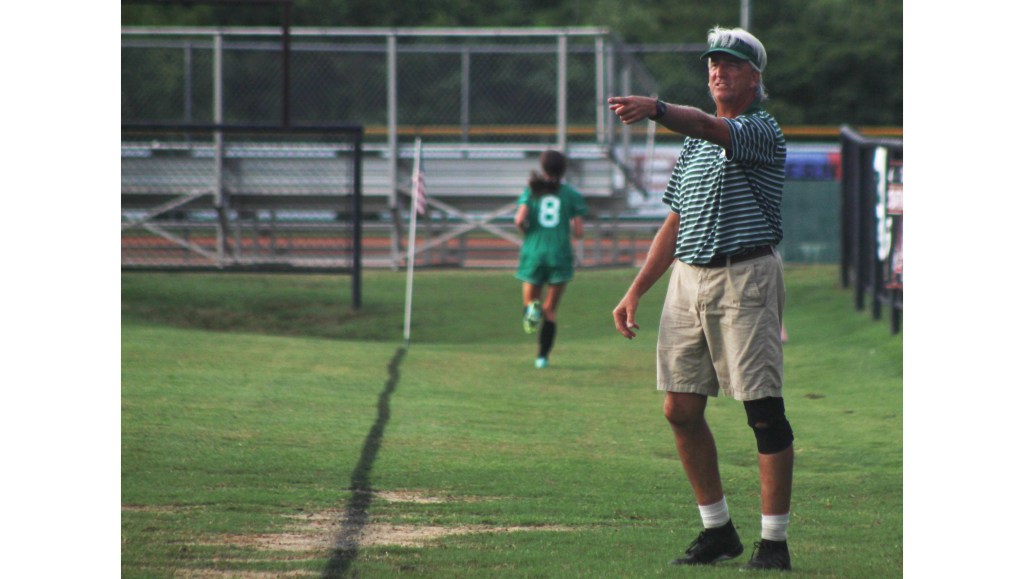 Cathedral head coach Dennis Hogue is leading the charge to get four additional players from the district that features Cathedral, Adams County Christian School, Brookhaven Academy, Copiah Academy and Oak Forest Academy. Coaches submitted nominations online and would have had a representative there had she not suffered a medical emergency. (Hunter Cloud | The Natchez Democrat)

JACKSON — The 2021 MAIS fall soccer season will come to an end Today with an All-Star game. Unfortunately for Brookhaven Academy, Cathedral and Adams County Christian School, not one player was chosen from the respective squads to play in the game.

In fact, only one player was chosen to play in the All-Star game from their district, an Oak Forest player.

“We aren’t just angry because none of our players made it,” Brown said. “I’m only fighting for the only player who deserves it. It’s not something we are trying to get a participation award for. You could make a strong argument for my goal keeper Amelia Anding, ACCS’s Maddie Cooley and Cathedral’s Izzy Dupre. If an all-star game is going to be done it needs to be done right.”

How does selection work

For those unfamiliar with how All-Star teams are selected, or supposed to be selected, each district nominates players and those are then selected to the team. Hogue said in an ideal world, each of the 35 teams would get at least a nomination into the 42 spots. This did not happen, he said.

“I don’t see how it is fair or a fair representation of the MAIS all-stars. It is baffling to me,” Hogue said.

Brookhaven Academy beat both Discovery Christian and Laurel Christian 1-0. At Laurel Christian, his goalkeeper Anding made a lot of saves. He said she only allowed 21 goals in 27 games which is an average of .77 goals per game, she also had 9 shutouts. Hogue said she was more than deserving to be on the All-Star team.

Many of the coaches in the district which Cathedral, Brookhaven Academy, Copiah Academy and Parklane play in have normal every day jobs and were not able to get to Jackson for the meeting. Oak Forests coaches both work in Baton Rouge and could not make it to Jackson on short notice.

The day before the MAIS meeting, the coaches met in Brookhaven Academy where they hashed out a ranking of the district’s top five players. Then they chose ACCS head coach Pam Weatherly-Williams to go to Jackson to represent them.

The day of the meeting, she had a meeting with her doctor about her knee at noon. The MAIS all-star meeting was at 9 a.m., and Hogue said she sent a text telling the group of coaches she could not make it to Jackson because her knee had swollen so badly.

“It is embarrassing that a bunch of coaches who are all about representing the girls are not,” Hogue said. “Our girls were basically overlooked and bumped. Shame on those coaches in the room who let it happen. It is beyond my way of thinking.”

This list was voted on unanimously by the coaches in the district,  Brown said. Their nominations were also submitted online through the MAIS website, Hogue said.

“They were already nominated. I don’t understand why we have to have a meeting,” he said.

After the list came out, Hogue called the MAIS director of athletics Chris Chance and got no answer. He said he reached out to MAIS executive director Shane Blanton who has yet to answer his emails or phone calls.

Over the past week, he has left voicemails and emails to try and get either an answer for the parents and kids on the team, or to get things corrected. Brown said he has kept the district’s five coaches in the loop on everything.

“We have all been supporting Dennis,” Brown said. “We signed letters and emails. All five of us have been in complete support. We are in this for the kids. If we are going to do all of this we need to get this right. Hopefully MAIS will be better at communication in the future too”

Who would have represented the district?

Cathedral and ACCS had two prolific goal scorers this year who would have easily made the All-Star team: Izzy Dupre for the Green Wave and Maddie Campbell for the Rebels. In midfield, Gracie Foster and Maddie Cooley worked hard and were often the powerhouse for their team.

Brown said an argument could be made for all four of those players to be on the team. Copiah Academy has a standout goal scorer who has started every year since seventh grade and gotten better each year, Copiah Academy head coach Brad Carr said. Brookhaven Academy Amelia Anding should have been the Cougars all-star after they won a district championship this year.

What could be done?

Hogue suggested adding two players to each team in the All-Star game so it is not a big shuffle of players. Hogue said all he has heard from the MAIS is that they should have had someone at the meeting to represent them and there is nothing they can do for them. As of now, neither Blanton or Chance have returned a phone call requesting comment.

“They aren’t listening to the problem,” Hogue said. “We were prepared, we had a plan and something unexpected and unforeseen happened. Now these poor girls through something outside of their control are not going to be considered.It is a damn shame. I’m sad and I’m embarrassed for the MAIS. It is a damn shame.”

With the all-star game happening Tuesday, the issue will become a mute point. However, Hogue said he is not going to let it go that easily.

For a lot of these players it is their one opportunity to step on a field with other like minded players, he said. It is an opportunity for them to be celebrated but to also showcase their abilities.

Last season, Kennedy Williams made the boys all-star game and through his performance he caught the attention of a coach at Millsaps. By the end of the school year he had signed a scholarship to play soccer there.