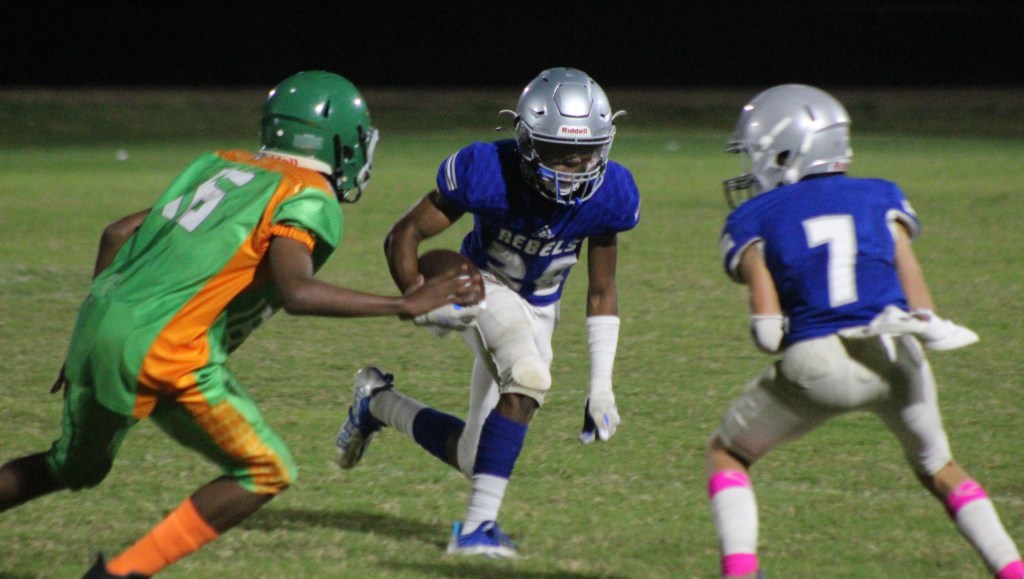 NATCHEZ — Adams County Christian School beat Wilkinson County High School 58-20 Tuesday night. As a group, the Wildcats and Rebels huddled together and prayed after the game.

Junior Varsity head coach Mathew Freeman told the Wildcats they hope to make the game a tradition and will travel to Woodville next year. Unfortunately, the first matchup between the two schools came because Freeman could not find anyone to play in the Miss-Lou.

“I asked Natchez Middle School, I asked Jefferson County, I asked Vidalia, Delta Charter, Ferriday and Cathedral,” Freeman said. “Wilkinson County was the only one who agreed to play us, and we are going there next year. It’s the first time we have ever played in an area public school. It gives our kids an extra two games to give them more reps to get them ready for next year.”

Adams County Christian School bounced out to an early lead as Chris Sewell returned the opening kickoff for a touchdown. Freeman said the play was the game-changer.

“We set the tone early,” he said. “We ran the opening kickoff back. It takes the wind out of the sail. It’s a big momentum swing for us.”

“This is back-to-back games where they could run,” Freeman said. “I like to reward them with some two-point conversion plays. You are doing a lot of stuff for everyone else to succeed. Every kid is to get to run a football and score. I like to see them smile.”

Before halftime, Burns scored on a 60-yard rush where he avoided tacklers and spun his way into the endzone to take a 30-8 lead.

In the second half, Burns scored on a short-yardage rush to extend the Rebels lead to a 37-8. AC’s Crews Marchbanks scored on an eight-yard rush. Caleb Daugherty made the extra point to make it a 44-8 lead. WCHS scored to bring the game to 44-14.

C.J. Ferguson found his way into the endzone after Colton Rabb connected with him on a 40-yard pass. This gave the Rebels a 44-14 lead. WCHS scored on a short-yardage rush to make the game a 51-20. D.J. Hutchins scored on a five-yard rush to cap the Rebels win off with a 58-20 win.

Their next game will be at Clinton Christian Thursday Night.

“We are going to have to play and execute our style of football,” Freeman said.