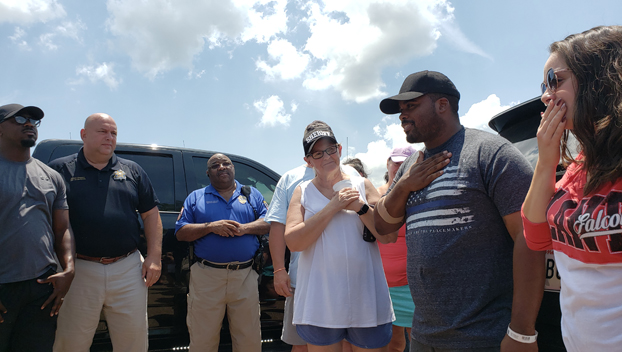 Concordia Parish Sheriff's deputy Walter Mackel stands next to his wife Pamala Mackel, in red, after he is discharged from the hospital in August 2019 to recover from being shot on duty. (File photo, The Natchez Democrat)

Dennis Cowan, Assistant Chief of Vidalia Police Department, said one of the Mackels’ children called the police on Tuesday and said, “Walter Mackel was hitting mom.”

When officers arrived, Cowan said they found evidence of physical abuse and obtained a warrant for Mackel’s arrest.

He was booked into the Concordia Parish Jail Tuesday on a charge of domestic abuse battery and later released on a $7,500 bond, according to arrest records.

Concordia Parish Sheriff David Hedrick told Monroe’s KNOE that Mackel had been suspended from the department with pay, adding he would not make any decisions regarding Mackel or the situation until he has all of the facts.

“I am concerned for all parties,” Hedrick said to the TV station. “Mackel has been a good employee. I’m here to protect the entire parish and I hold my deputies to a higher standard. And if this case proves to be true, then I’m going to have to make other decisions, of course. But until he has his day in court, I can’t prejudge somebody on something that happened when I was not present.”

Mackel was shot and wounded in July 2019 by a suspect while investigating a robbery report and received the Good Cop Award later the same year.

On Wednesday Mackel’s wife, Pamala, posted on her social media page that she reported to law enforcement agencies repeatedly that she has been abused by Mackel for the last year.

“I’ve (called) the police repeatedly and nothing has ever happened to him because he’s a ‘police officer,’” she stated.  “I have the reports, one of them so bad that I actually was hospitalized from being knocked unconscious. The only reason he was arrested this time was because my kids recorded the incident (that’s right physically assaulted in front of our children) now there is actual proof that cannot be ignored.”

Cowan confirmed there had been one other report of a domestic situation between Mackel and his wife from December 2020.

In the December incident, Cowan said both were cited with a misdemeanor and were summoned to court.

“Both refused to testify against each other,” he said. “When that happened, the state had no witness and so it was dismissed.”

Cowan said no other reports had been made.

Hedrick declined to comment on whether the Concordia Parish Sheriff’s Office was informed of any other incidents.

He said, “It is not my case and I will not interfere with another department’s investigation.”

According to court records, Walter Mackel filed a petition for protection from his wife for abuse on Dec. 30, 2020, which was granted by Seventh Judicial District Judge Kathy Johnson. In the petition, Walter Mackel stated Pamala “repeatedly calls police and lies stating I assaulted her” and was “tearing up the house” and “chasing me with a bat.” The petition also alleges that Pamala assaulted Walter Mackel in September 2019, less than two months after he was shot and injured.

Walter Mackel declined to comment for this story due to the charges against him. Pamala Mackel could not be reached.