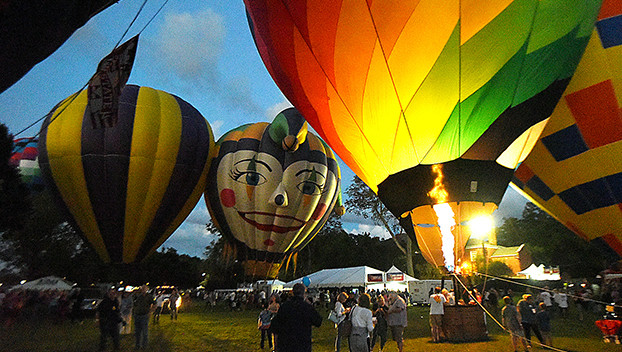 Balloons glow at the Natchez Baloon Festival site Friday night on the grounds of Rosalie. (Ben Hillyer / The Natchez Democrat)

NATCHEZ — The Natchez Balloon Festival is like a walk down memory lane for Ron and Mimi Miller, who were both recipients of the “Spirit of David Steckler Award” during Friday night’s balloon glow event on the Natchez bluff.

The award honors faithful balloon race volunteers for their tireless efforts that make the race possible.

The Millers were involved when the first ever Great Mississippi River Balloon Race was organized in 1986.

“While having lunch on Main Street, James Biglane, Cappy Stahlman and Ron Riches discussed having a balloon festival here in Natchez,” Mimi said, adding they approached the Historic Natchez Foundation to help promote the event.

“The first one was at the Natchez Mall and we only had a few balloons,” Ron said.

Mimi added, “It’s interesting to see how much it has changed over the years and it’s wonderful that we now have it at Rosalie.”

Mimi said so much of Natchez history has taken place on those very grounds and it’s only fitting that the balloon festival be a part of that history. The same place where Union army tents were pitched for the troops in war is the place where Natchez throws its biggest party and attraction of the year and were people come to laugh and drink and be merry underneath the glow of hot air balloons.

This is the history that Ron and Mimi Miller helped present and that David Steckler used to recruit sponsors for an event that at the time, no one knew anything about.

“Most everyone in Natchez had never even seen a hot air balloon and now it’s become a part of life here,” she said. “Ben Hillyer told me that when his son Gibson was little, having grown up here, he would point to Rosalie and say ‘That’s the balloon house.’”

The Millers said they were delighted to receive the Steckler Award after many years of involvement in the balloon festival.

“I think it is really sweet of them to think of us,” Mimi said. “Really it should go to a volunteer and for us it’s a job and we’re glad to be a part of it.”

Just before Ron and Mimi were called to the stage, the Natchez Balloon Festival committee honored another post-mortem who was there for the first balloon festival.

The name of festival co-founder, “Cappy Stahlman,” written in lights illuminated the sponsor tent, which will now be named for him.

After the balloon glow and ceremony at Rosalie, fireworks glittered off of the surface of the Mississippi River followed by throwback music from YZ Ealey and company and “The Fabulous Thunderbirds.”

“I’m just here to keep the blues alive because the blues is my inheritance,” Ealey said before strumming the first notes on his guitar.

Opening day of the 36th annual Natchez Balloon Festival was eventful, close to the ground.

Fog and low-lying clouds and later gusty wind kept hot-air balloons from flying Friday — but that didn’t keep balloonists and those who came to watch the spectacle from having fun.

Balloonists had hoped to take off from the new Azalea Gardens subdivision on US 61 South, across from the Roux 61 restaurant on Friday morning and at least 100 spectators followed them to watch.

While winds conditions were favorable for flying, a thick layer of fog and low-lying clouds kept the balloons grounded.

Instead of flying their balloons across the Miss-Lou skies, pilots treated balloon race fans to tethered rides and up-close photo opportunities.

Balloon pilots were scheduled to meet up at Magnolia Bluff’s Hotel for flight briefings at around 6:30 a.m. and again around 3:30 p.m. Saturday and Sunday, where they will determine where to fly or not fly depending on weather conditions.