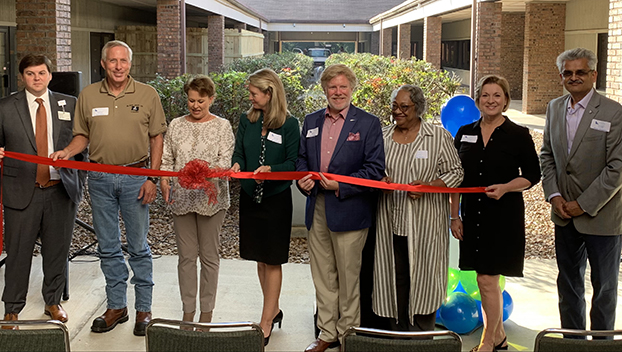 The facility opened to patients on Monday and Friday morning the red ribbon was cut.

Sanders, along with other officials, said such a facility has been a dire need in Natchez and the surrounding counties.

“A lot of times we will have someone appear in court and you can just tell that they are having a severe mental health crisis,” she said.

In terms of the number of committals in each county in the state per capita, Adams County lingers in the No. 1 or No. 2 spot second only to Hinds County, Adams County Sheriff Travis Patten said.

Before having the residential mental health facility here, these patients would be transported to Whitfield, Meridian or the Gulf Coast.

Southwest Mississippi Mental Health has been on the hunt for a location for such a facility for upwards of three years, Vince said.

The project hit a few roadblocks, including some community pushback when the Elks Lodge building on Lower Woodville Road was the proposed location for it.

“Lance Boyd, the former CEO of Merit Health Natchez, reached out to us and, in the end, they wound up donating this complex to us,” she said.

Committals can be both voluntary or involuntary through court referrals, she said.

Vince said the facility is not meant for long term hospitalizations but for stabilization and outpatient care.

“We serve regionally and our goal is to treat them within their own community and return them to their community as quickly as possible,” she said.

Southwest Mississippi Mental Health accepts insurance for the cost of care and utilizes grant funds to help with individuals who are uninsured, Vince said.

Hiring opportunities are now available for those with doctoral, master’s, and bachelor’s degrees in social work, psychology, counseling or a related mental health field and to psychiatrist and psychiatric nurse practitioners.