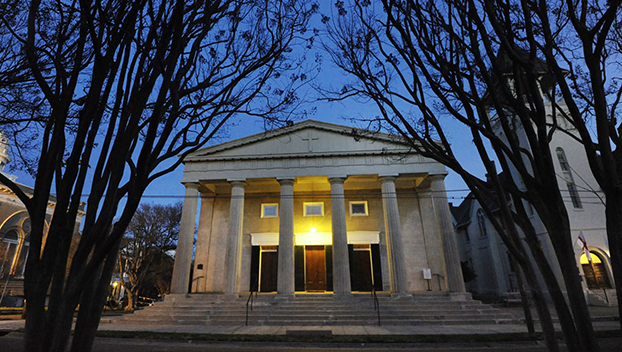 NATCHEZ – Trinity Episcopal Church launched its celebration of 200 years in Natchez Sunday afternoon with a lecture and premiere of the documentary “Faith in Action since 1822.” In addition, Trinity Church revealed extensive renovations inside Kuehnle Hall with the creation of exhibits and photograph displays.

“I want to officially welcome you to the first of our Marion Smith Speaker Series,” said the Rev. Ken Ritter, rector of Trinity Church. “The speaker series is named after Marion Smith one of our very long-time parishioners. So, we’re grateful to offer this opportunity to all of you as we begin our celebration of our bicentennial in this upcoming year.”

Guest speaker was Dr. Dennis J. Mitchell, professor emeritus at Mississippi State University, who talked about what life was like in Natchez during Trinity’s formative years. He spoke via internet conferencing.

According to the “History of Trinity Church” script for the documentary, “In the early 1820s, Anglican settlers in the Natchez area were eager to have an Episcopal minister and a church building in which to worship.

“An article in The Natchez Democrat on February 17, 1884, states that a group of men were dining in 1821 at the home of Stephen Duncan when a discussion arose about an upcoming marriage. The men asked one another, ‘Why can’t we have an Episcopal minister? Why can’t we have a church?’

“Their wishes were soon fulfilled, for at their invitation, on March 9, 1822, The Reverend James Pilmore of Maryland, an Oxford University graduate, arrived in Natchez. He became the first Rector of Trinity Church on April 9, 1822.”

The 18-minute film was narrated by John Norris of Crooked Letter Picture Co., and was created by a group of collaborators.

“Tonight was a wonderful kickoff for Trinity Church’s bicentennial celebration,” Ritter said. “We want to thank all the people who attended, both Trinity parishioners and those from other faiths. The Bicentennial film received positive reviews, and our magnificent displays were much appreciated. “

Ritter added, “Many people worked very hard to tell the Trinity story both in film, print and exhibits. I’m proud of all their contributions. We welcome visitors to stop by and see our history in pictures, displays, art work and more.”

“The 200th anniversary celebration in 2022 of Trinity Episcopal Church got off to a great beginning on Sunday,” said Carolyn Vance Smith, chair of the Bicentennial Celebration. “We were reminded that many impressive people since 1822 have laid a great foundation at Trinity. We draw inspiration and hope from them as we move toward the church’s third century.”

Individuals may see the exhibits in Kuehnle Hall during the church’s regular hours on Sundays after church services and Monday through Thursday 9 a.m. to 3:30 p.m. and Friday 9 a.m. to noon. A copy of Mitchell’s presentation is on the church’s web site trinitynatchez.org.