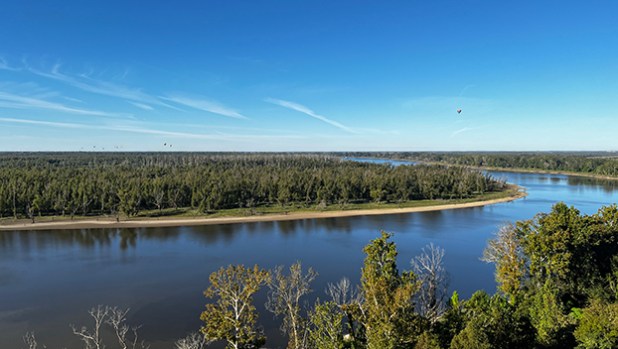 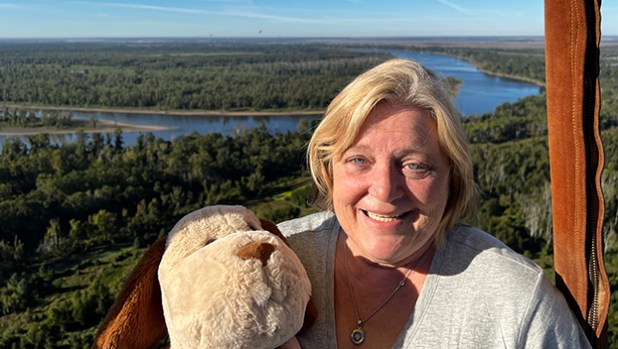 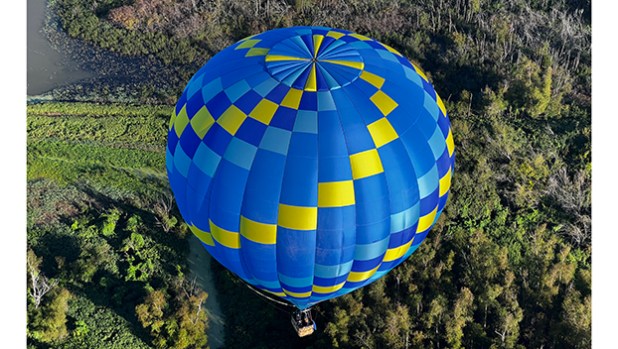 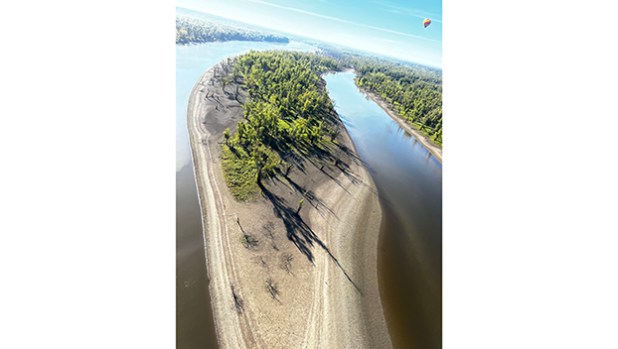 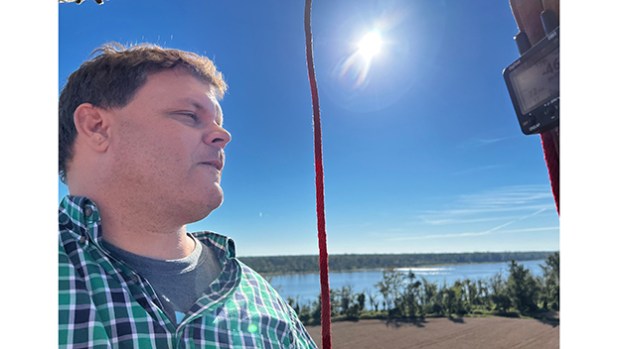 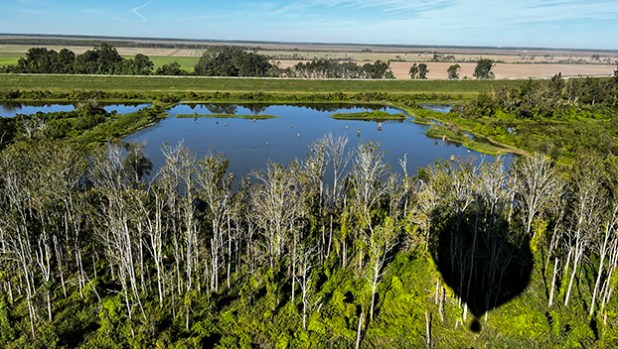 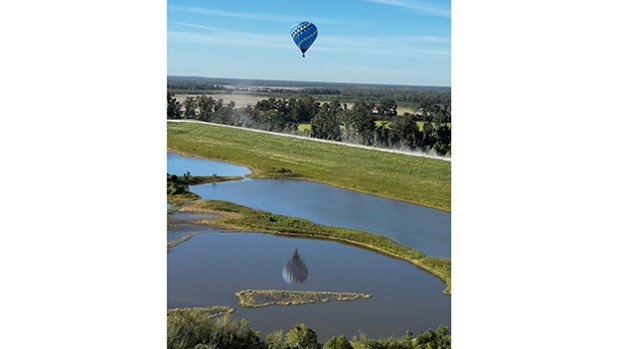 A morning time hot air ballooning adventure begins before sunrise. On Sunday, almost everyone didn’t mind waking before dawn to catch a glimpse of the massive orbs of color floating off into the heavens — especially after waiting an entire weekend for it.

Friday, fog and low-lying clouds had kept the balloons close to the ground where they wouldn’t have to worry with invisible powerlines or towers.

On Saturday, wind made it almost impossible to tether a balloon. Once they inflate, they would get whipped around like a giant kite, only much heavier and impossible to manage.

All the pilots were waiting for Sunday, when things would be much calmer close to the ground and they would have to climb a few hundred feet in the air to even get a small wind push southward.

It’s not the ideal direction, and some pilots wouldn’t even attempt crossing the river for fear that they would get trapped following a path of water and woods with nowhere to land.

Not satisfied with this, Balloon Meister Bill Cunningham called for a 15-minute flight hold Sunday morning while he could come up with a flight plan that would please the crowd, who waited almost an entire weekend to watch a balloon fly.

He decided he would take off from behind the Natchez mall and attempt to fly over across Natchez island into Vidalia.

The pilots who weren’t comfortable making the trek over the river drove across to Louisiana to fly without attempting the competition flight.

They call the competition, “The Hound and the Hare,” when Cunningham takes off first and places a target wherever he lands. The balloonists who follow his path attempt to drop a beanbag attached to a streamer where he landed. Our pilot, Matt Torgerson, was up for the challenge.

His flying days began when he was just a teenager. His dad, Larry, was one of the first pilots to join the Great Mississippi River Balloon Race, he said. Torgerson, who lives in Louisville, Kentucky, had flown in Natchez many times in his own balloon but had skipped several years.

He was flying his dad’s old balloon — a solid yellow balloon with black flags called “Old Yeller” — for the first time. As a seasoned pilot, he had no trouble figuring out where all the ropes, pins and clips were supposed to go.

He took up myself and one other passenger, Shasta Clark, who works with Paul Green & Associates real estate agency in Natchez.

Having flown only three times before with three different pilots, this flight was perhaps the most beautiful even if not the most memorable — It’s hard to top the first flying experience.

The only way to describe it is like free-floating — not like a plane, where you can still feel the slight vibration of an engine keeping you aloft. The burners shed an immense amount of heat right above our heads with a loud roar but we stayed comfortable thanks to a welcome cold front that kept us grounded the day before.

We took off from the front of the Natchez mall and flew right over Longwood, a famous octagonal-shaped mansion in Natchez.

It’s impossible to see the tops of other balloons, which are several stories high, except from the air — and we saw several all at once as they were still getting ready to takeoff behind us.

At one point, we floated over Kurt Vitense flying his yellow and blue spiral-patterned balloon called Oasis. The two pilots were close enough to converse with one another in mid-air.

“Hey Kurt, If you run out of fuel could you just tilt your head back and start talking to stay up?” Torgerson asked Vitense teasingly — insinuating he was literally full of hot air.

We hovered over mostly hunting camps, creeks and small streams where we could see several whitetail deer hopping through grassy meadows. We could see the reflections of Old Yeller and other balloons as they crossed over bodies of water and waived to a fisherman, whose boat looked no larger than a toy car as we passed over.

The flight lasted nearly two hours. Torgerson said we took off with 40 gallons of fuel and landed with only a few gallons left in the tanks. We bounced around to “Cupid Shuffle” as we prepared to land. We were just a few yards too far right from the target, placed next to a field on the other side of a levee in Vidalia.

“All of that work,” Torgerson said with a huff at having missed after hurling the bean bag by the end of the streamer as far as he could.

Arguably, the most fun thing about flying isn’t the flight itself. It’s the company you keep throughout the whole experience, whether it’s while flying, crewing or having breakfast afterward — which was delicious. I snapped a few pictures with Clark, Torgerson and his flight companion, a stuffed puppy dog that has flown all across the country.

These new friends will be added to a long list of people I look forward to seeing in the years to come.