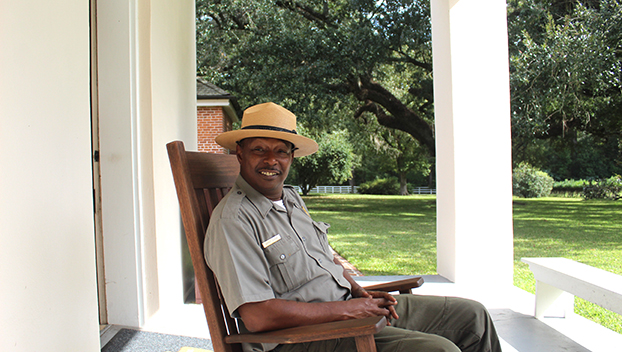 Natchez Park Service Ranger Barney Schoby has worked with the Park Service full-time since 2015. Melrose offers adventures each day because he said he never knows what will come in the gates. (Hunter Cloud | The Natchez Democrat)

“I’m Natchez born and bred and when I die I’ll be Natchez dead,” Schoby said.

He attended North Natchez High and graduated from there in 1988, a year before it closed in 1989. He attended Alcorn State University where he studied history. It was a subject he not only enjoyed but excelled in as a high school student, he said.

“I have a passion for history,” he said. “Being from such a historic town, you can’t help but be absorbed into the historic significance of what made Natchez one of the richest cities in America.”

Schoby earned a masters in workforce education, which gave him a chance to develop skills for working with the public. It gave him a professional perspective, he said.

Together, his bachelors and masters degrees gave him the opportunity to do what he loves and now he gets paid to do it, he said. His journey with the National Park Service began in 2010 when he started as a volunteer. In 2012, he was offered a pathway which led to his permanent employment in 2015.

“You never know what will walk through the gates of Melrose,” Schoby said. “Everyday is a new adventure. My degrees allow me to be able to handle the unknowns that I’m presented with each day. One of the things I’ve encountered here is language barriers. I’ve learned that expressions instead of language can be an adventure. The expression on someone’s face lets me know someone is interested in the conversation.”

Working with the public

His duties as a park ranger are to interpret the space and time of the antebellum period, to assist visitors with information and to implement programs that are community oriented.

“It allows you to express not only the institution of slavery, but also how a race of people fought to free themselves and save a nation,” Schoby said. “I stand on the shoulders of men who made the sacrifice to give me that freedom. They did it in a time where racism ran rampant.”

When he is not in uniform, he is active in his fraternity Omega Psi Phi. He said he volunteers his time through the Enoch Masonic Lodge No. 18, which is a community service organization, and Natchez Non-Violence group to stop the violence in the city’s young black men.

He also partakes in golf and fishing.