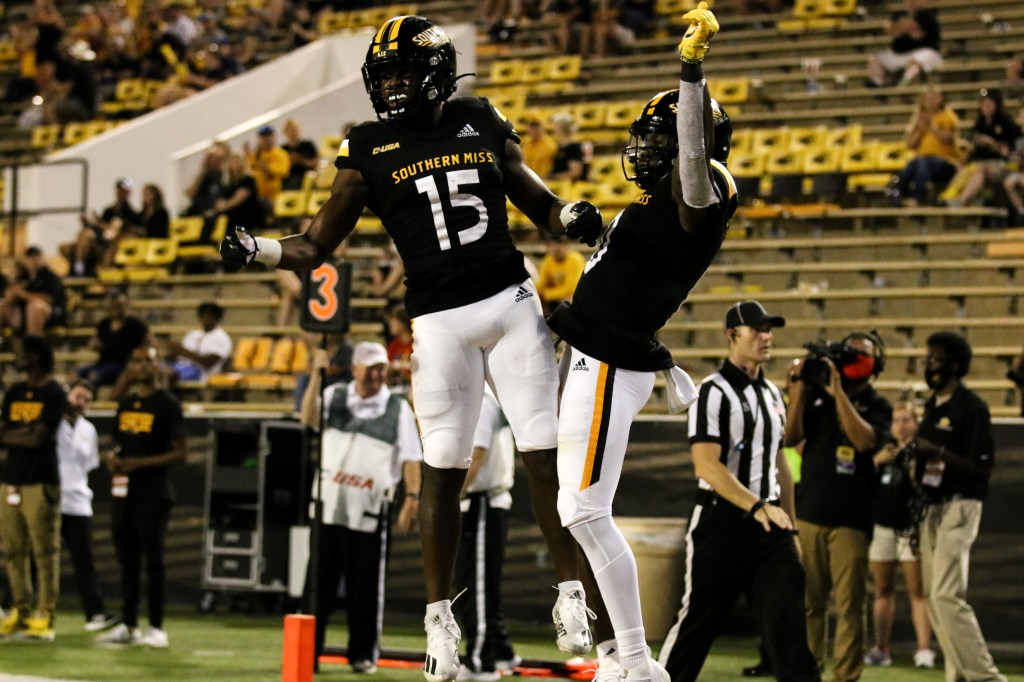 Natchez native Jakarius Caston, No.15 celebrates with a teammate. Southern Miss will play as a member of the Sun Belt Conference this next football season.(Courtesy Photo | Southern Miss Athletics)

HATTIESBURG — Natchez native Jakarius Caston’s path to football began as an 8-year-old playing youth football. He said he only remembers scoring a lot of touchdowns.

He played basketball, baseball and ran track in addition to playing football. A leg injury ended his career in basketball by the time he got to ninth grade, so in his junior and senior year he chose to focus solely on football.

“He had a very strong burst and was physically strong,” King said. “He was one of those guys who had an internal fire that was constantly burning. When you needed a big play he was always there. He was a high character kid too.”

South Alabama offered Caston a scholarship as did a few junior colleges. His decision was to play football at Hinds Community College in hopes of earning a college offer somewhere else. He played for two seasons at Hinds, although last year they were only able to play four games and does not count against his eligibility.

USM wide receivers coach Desmond Lindsey recruited Caston at Arkansas State before he left the job. He told him he would offer when he landed somewhere, and he did when he got to Southern Miss.

“Where he went he told me he would offer me and he did,” Caston said. “It is close to Natchez and I can come home. It has been fun. I came in the summer and was at the back end of coming in and trying to play. As summer practices progressed, I got a chance to make plays.”

Opportunities to play sprang from workouts, he said. Fridays are called “find a way Friday,” he said. In one-on-one drills he was winning a lot of reps and showing potential, he said.

Tuesday’s are called “competition Tuesday,” where they compete for a spot on the depth chart. Currently, he is competing for a No.1 spot on offense and a No. 2 spot on special teams.  Steadily he is working his way up.

Southern Miss played Grambling State on Sept. 11, 2021, where he caught his first touchdown pass. He said when they got down to the 10-yard line and Grambling State was in man coverage they would throw a jump ball.

“I know from the start I had to win the route,” Caston said. “I went inside on him and then jumped outside to give me room to catch the pass. It was a hard catch but I brought it in. I was so excited. I came from a small school so I have never heard a crowd that loud.”

Playing football at Southern Miss has given him an opportunity to play in front of one of the biggest crowds in college football. An away trip to Bryant Denny Stadium in Tuscaloosa Alabama, the Golden Eagles faced the then No.1 Crimson Tide on Sept. 25.

He said a lot of people would love to play at that level. On the field, he faced some of the best defensive backs he could ever play against. It taught him a lot, he said. It was a loud atmosphere too.

“When they scored on the opening kickoff, I could not hear someone standing next to me,” Caston said.