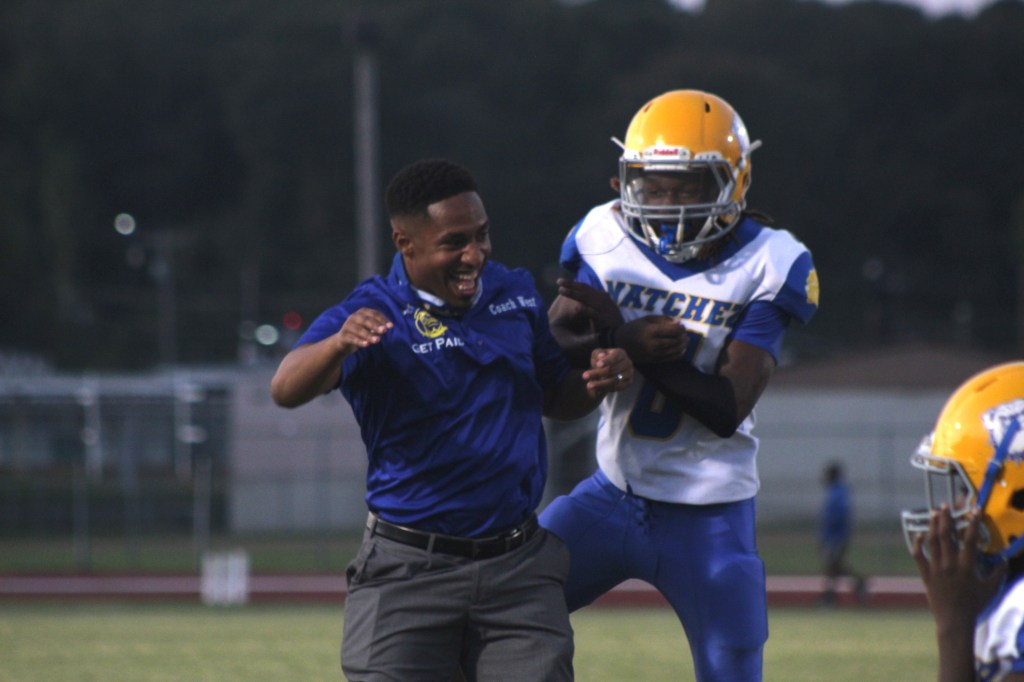 Head coach Josh West and Javis Johnson celebrate after his first of three interceptions on the night. Natchez Middle School hung on to win 22-14 over Jefferson County Middle School to win their fifth straight championship. (Hunter Cloud The Natchez Democrat)

NATCHEZ — Natchez Middle School quarterback Kameron Morgan rolled out to his left and stayed in bounds. As the final seconds rolled off the clock, kids picked up an ice bucket and ran towards head coach Josh West.

“It was feeezing and they always get me the same way,” West said. “I never wonder why they get my phone. Usually they ask me for my phone and I’m so focused on the game I give it to the. It felt good.”

Morgan opened the game with a 20 yard pass to Cedric Owens. Natchez did not convert the two point conversion but took a 6-0 lead over Fayette.

“It’s my seventh grader year. I didn’t expect to start this year,” Morgan said.  “I want to cry right now but I’m going to hold it in. It felt good I put so much into it and so did the team. It wasn’t really hard. When the game first started I was nervous. When the first snap happened  All the nerves left.”

Javis Johnson made his second Interception of the night and returned it to the 47. Natchez’s defense came up with another turnover when  William Johnson III recovered a fumble at the 25.

Morgan got the Bulldogs on the board again as he completed a 16-yard pass to Tylan Stewart. The two-point conversion was good and Natchez took a 22-0

Jefferson County got on the board late in the game with a 25 yard rush to the right side. Natchez still led 22-6.

The Tigers scored again on a 45 yard scoop and score to bring the game to 22-14. They added a two point conversion with :07 seconds left in the 3rd quarter.

With three minutes left, Johnson made another interception, it would have been a pick six if it wasn’t for a blindside block.

“When I first caught it I had to watch the play,” Johnson said “I broke four tackles and got loose and I scored. When I saw they called the penalty I thought ‘I worked too hard for this,’ I wish it would have counted.”

He said it was his first time to have three interceptions. He said he was in his zone.

“I felt like I had to show out since it was my last middle school game,” Johnson said. “I plan to improve before next year.”