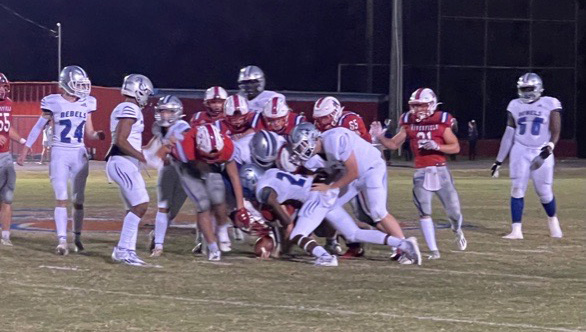 RAYVILLE, La. — Jamar Kaho scored on a 14-yard touchdown run with 3:55 remaining and J.J. Claiborne ran in for the two-point conversion as the Adams County Christian School Rebels held on for a 43-36 win over the Riverfield Academy Raiders Friday night.

The win over the two-time defending MAIS Class 4A state champions gave ACCS (8-2, 4-0) the outright District 3-4A championship. With that comes a first-round bye in the Class 4A Playoffs and hosting a second-round game on Friday, Nov. 5. The Rebels will be either the No. 2 or No. 3 seed.

Even though Riverfield entered the game with a 3-6 overall record, the Raiders played a tough schedule and they made sure that the Rebels were going to earn this win — even after trailing 21-6 just 10 seconds into the second quarter.

“It was a battle from the opening kickoff. We weren’t our sharpest, but they had a lot to do with that,” ACCS head coach David King said. “They played well and gave us all we wanted. We didn’t play our best, but we played well enough to win.”

Three big plays by the Rebels’ offense on their opening drive led to a two-yard touchdown run by Claiborne just 34 seconds into the ball game for a 7-0 lead.

Drew Holley threw a 29-yard touchdown pass to Barnes Williamson with 5:35 left in the opening quarter, but the extra point was no good and the Rebels led 7-6. Then with 3:13 to go, Connor Aplin scored on a three-yard run. Samuel Merriett’s extra point gave ACCS a 14-6 lead at the end of the first quarter.

Coleman Carter threw a 36-yard touchdown pass to Coin Cauthen at the 11:50 mark of the second quarter for a 21-6 lead. After that, the Raiders’ defense stepped up and that allowed them to get back in the game.

“We were balanced on offense. Defense did just enough to win,” King said.

Holley scored on a one-yard run and threw a two-point conversion pass to Evan Bickford with 9:03 left until halftime to make it a 21-14 game. Kaho scored on a 27-yard pass from Carter to give ACCS a 28-14 lead with 5:44 remaining in the second quarter. Brett Whorton ran in from seven yards out, but the extra point was again no good and the Rebels went into halftime up 28-20.

“When you watch a team on film, it’s hard to believe they are 3-6. They put it all together tonight,” King said about Riverfield.

The Raiders tied the game at 28-all on Addison Shelton’s three-yard run and two-point conversion run with 6:51 left in the third quarter. Carter then scored on an 18-yard run to give the Rebels a 35-28 lead.

Then with 6:51 to go in the fourth quarter, Shelton scored on a 17-yard pass from Holley. Whorton’s two-point conversion run gave the Raiders their first – and only – lead of the game at 36-35.

After the Rebels regained the lead, it was up to the defense to make a stand and it did. Aplin had a key sack of Holley and on fourth-and-one, ACCS stopped Riverfield short of the first down and ran out the clock.

“It was a team effort. Our seniors tonight, at the end, willed ourselves to the win,” King said. “We have a bye this week. We’ll get some guys rested. We’ll celebrate this win tonight and get back at it tomorrow.”