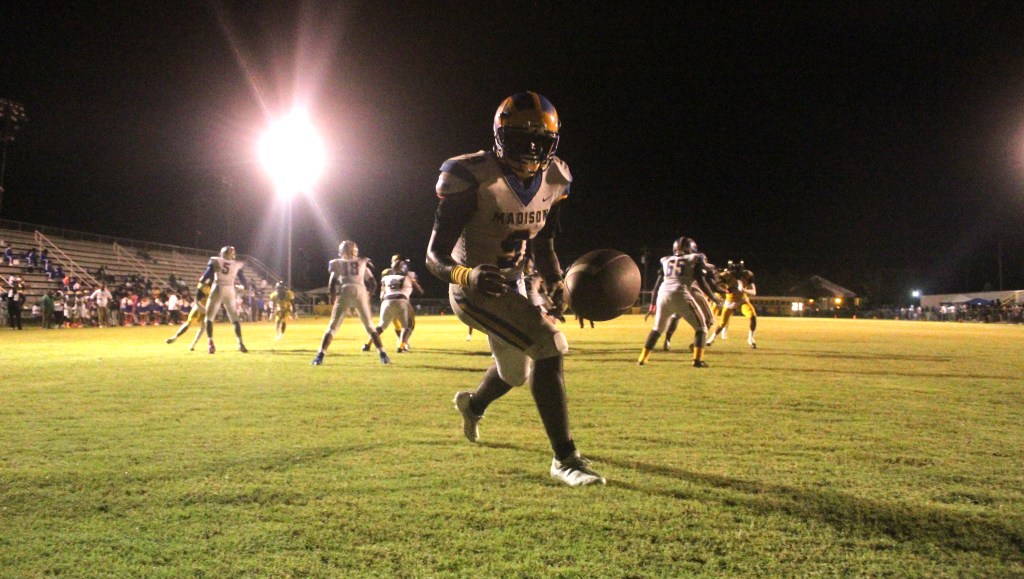 The Madison punter watches the ball go out the back of the Madison Parish endzone for the safety that gave the Trojans the lead and the momentum in their 32-22 win over the Jaguars.(Hunter Cloud | The Natchez Democrat)

FERRIDAY — Pinned inside their five-yard line, Madison Parish was held to a punt by the Trojan defense. The punt was low and hit the ground in front of the Jaguars punter.

He turned to his right and tried to stop the ball but it bounced out of bounds between the goal posts. The resulting safety was the defining point in the game as Ferriday took a 24-22 lead and would go on to win 32-22 on homecoming night.

“It feels good. We came out and finally played four quarters,” head coach Stanley Smith said. “We had a little lull in the second quarter. We bent but didn’t break on defense. It was close. We made a lot of fourth down stops tonight. It was good to see us step up in adverse situations.”

One of those situations came late in the fourth quarter as Madison was down by 10 points and knocking on the door. A goal line stand for the Trojans kept the Jaguars out of the endzone.

A play after the turnover on downs, senior running back Jaquarius Davis hit a hole and found himself in open space. Splitting defenders, he flipped the field with his legs and iced the game as Ferriday kneeled the clock out in victory formation.

He scored three touchdowns on the night. The first was a 70-yard rush to tie the game at 8-8 a minute into the first quarter.

His second touchdown was on a 62-yard rush as he put the Trojans in front 22-8 with 41 seconds left in the first quarter. After the safety, he scored on a 24-yard touchdown rush to start the fourth quarter and put Ferriday up 32-22.

“I’ve been out the last two weeks with a COVID quarantine,” Davis said. “I’ve been working. Even though I was home I still had to work and come back stronger. My favorite touchdown was all of them. We gotta keep going from here.”

The entire game, senior wide receiver Sharone Finister Jr. jawed with a Jaguars cornerback. He earned bragging rights when he caught a 30-yard touchdown pass from Jontavius Holmes in the second quarter to put Ferriday up 14-8.

“I pulled a stutter step and saw he was coming down,” Finister said. “I kept going and the quarterback put the throw on the money. My main focus was catching the ball and making sure I scored.”