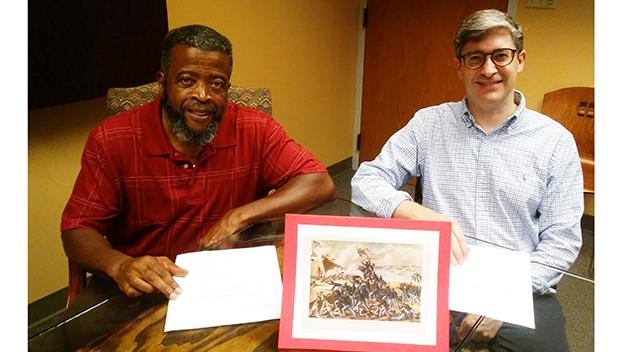 NATCHEZ — The Natchez community is asked to participate in a public meeting to give input into the proposed Natchez U.S. Colored Troops Monument.

The meeting is Wednesday, Nov. 10, at 6 p.m. at the Natchez Convention Center.

The monument committee is hoping to gather public input on the proposed monument project, which will honor the more than 3,000 African American men who served with six regiments at Fort McPherson in Natchez. That number includes the Navy servicemen who were born in Natchez.

“I have been told that more than 90 percent of the African Americans in Natchez now are probably descendants of one of the U.S. Colored Troops, but they don’t know it,” said Roscoe Barnes III, who is chair of the subcommittee on marketing and public relations.

“In addition to gathering input, we want to provide tips and pointers for people here to determine their relationship with the Colored Troops,” he said.

Since forming earlier this year, the committee has been working to determine and establish the design of the monument, a site for its display, accurate history of the U.S. Colored Troops, identify the descendants of the Natchez-Adams County U.S. Colored Troops, form a non-profit for the group and find funding for the project.

The full committee is broken down into subcommittees. The chairperson of each subcommittee will provide and report on the work done to date and will seek comments and ideas from the community members present, Barnes said.

Subcommittees and their chairs include:

“It’s not just our ideas for this monument. We want the community as a whole to voice their opinions and to give us their ideas,” said Robert Pernell, chairman of the Natchez U.S. Colored Troops Monument Committee.

“This is a community project and we want everyone to have an opportunity to comment on it,” he said.

Barnes said the committee wants to be as transparent as possible in every aspect of its operation.

“We know we need the input from the public. This is not the committee’s project or the project of a handful or people or a single person. This is the community’s project. That’s why the mayor himself is playing a lead role here. We want the citizens of Natchez to give us input,” Barnes said.

He said the meeting will be recorded and the committee is hoping to broadcast the meeting as a Facebook Live or something similar.

“We want to make the information available for those who cannot attend,” He said.