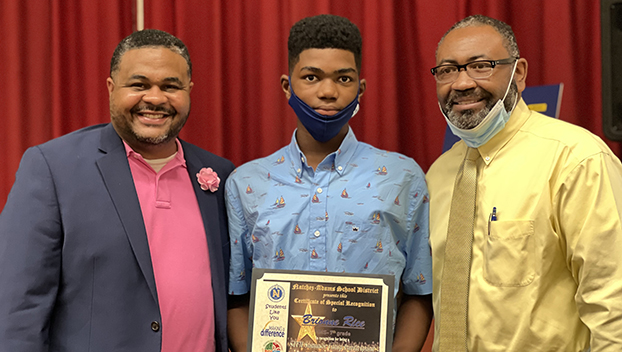 He did this while participating in a STEM summer camp program at the University of Memphis called National Youth Leadership Forum-Pathways to Stem.

“It took two hours to build, but for me it was an hour and a few minutes,” he said. “Then it took two days to program and set up on my phone. We had to do all of the coding.”

The program in Tennessee took up one week of his summer, Rice said.

He spent the week connecting with other students over meals and projects they did together on a university campus.

“It was fun,” he said. “It gave me something like a college experience.”

“Students learn a wide variety of things,” King said. She added she chose to nominate Rice because she felt he’d be successful at the camp and get a lot out of it.

“The students learn so much and the opportunity is great for them.”

Rice said it was already his dream is to become an engineer when he grows up, and the camp helped boost his excitement for it. If that doesn’t work out, Rice said wants to play professional football in the NFL.

His favorite football player is Michael Thomas, a wide receiver for the Saints.

He said he became interested in engineering by watching other engineers build things on YouTube. He also enjoys mathematics because it comes easily to him, he said.

“There are certain things you need math for when building,” he said.

Rice received a certificate and special recognition for choosing to be a part of the summer program during a Tuesday meeting of the Natchez Adams School District Board of Trustees.