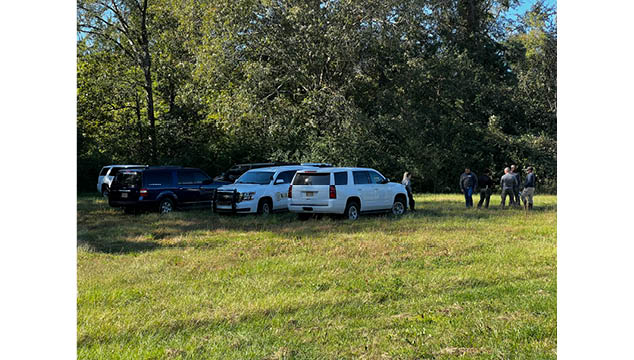 NATCHEZ — Unidentified human remains were found in the woods near Booker and Morgantown roads on Tuesday morning.

Patten said the remains were located approximately 250 to 300 yards in the woods from the 100 block of Booker Road using cadaver dogs.

Patten said officers are investigating the death as a homicide.

“From the condition of the remains there appears to have been some trauma. The State Crime Lab in Jackson should be able to identify them using DNA,” Adams County Coroner James Lee said, but he could not give an estimate of how long the identification process might take.

The Natchez Police Department is also investigating the case.

Natchez Police Chief Joseph Daughtry said K9 units had canvased the area on different occasions and had not found anything.

“We looked until the dogs were tired out,” he said.

With additional resources from other agencies, Patten said remains were found within two hours of beginning the search on Tuesday morning.

“We had Premiere Search and Rescue, United Cajun Navy, Jackson County Sheriff’s Office K9 Unit and our (Adams County) Search and Rescue out here with Adams County Sheriff’s Office searching the woods this morning,” Patten said. “At this point, the remains are unidentifiable. It’s one of those situations where you hope to bring the family closure but at the same time you don’t want to tell them their loved one is gone. This is an ongoing investigation and we ask anyone with information to contact ACSO or Crime Stoppers.”

To contact Crime Stoppers and leave an anonymous tip, call 1-888-442-5001 or download the P3 app using any mobile device.

UPDATE: Man pulled out of Mississippi River arrested on…