Pyron died Monday night after a battle with lung cancer. He had been in remission, but the cancer reoccurred in the spring, his son David Pyron said. 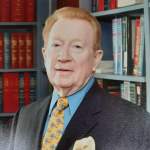 Sue Goss of Natchez is one of a group of people with whom Pyron walked almost every morning for the past 28 years.

“We all met at Main Stream Fitness,” Goss said. “That tells you how long we have been walking together.”

Goss said she and a number of the walking group met for lunch last Thursday, then traveled to Pyron’s home for a visit.

Pyron was the leader of the walking group and picked each day’s route, Goss said. “He led the pack and would tell us which way we were walking. We met to walk at 6 a.m. and then would have coffee together at Natchez Coffee Co. and share out lives with one another,” she said.

Pyron was proud of his sobriety, which he maintained for 31 years.

“He gave his testimony while we were sitting with him last week. He said God had been good to him and had helped him provide for his family. Bernie loved his children and he certainly loved his grandchildren…I’m going to miss my friend.” Monroe J. Scott worked with Pyron at Bernie Pyron’s Furniture for a little more than 48 years. He retired when Pyron closed his store in December 2016.

“I started off there when I was just a young kid. I kind of grew up under him and learned a lot from him and thank him for giving me the opportunity,” Scott said. “We had a good working relationship. He enjoyed working with our customers and bringing quality furniture to the Miss-Lou.”

Scott said Pyron was a hard worker and taught and employed good ethics.

“He was a real good businessman. He treated his customers and employees well. He was pretty much the same all the time. The customers came first and he built the business on good, quality furniture and treating the customer right and giving good service.” Scott said. “Everything comes to an end. He will be missed.”