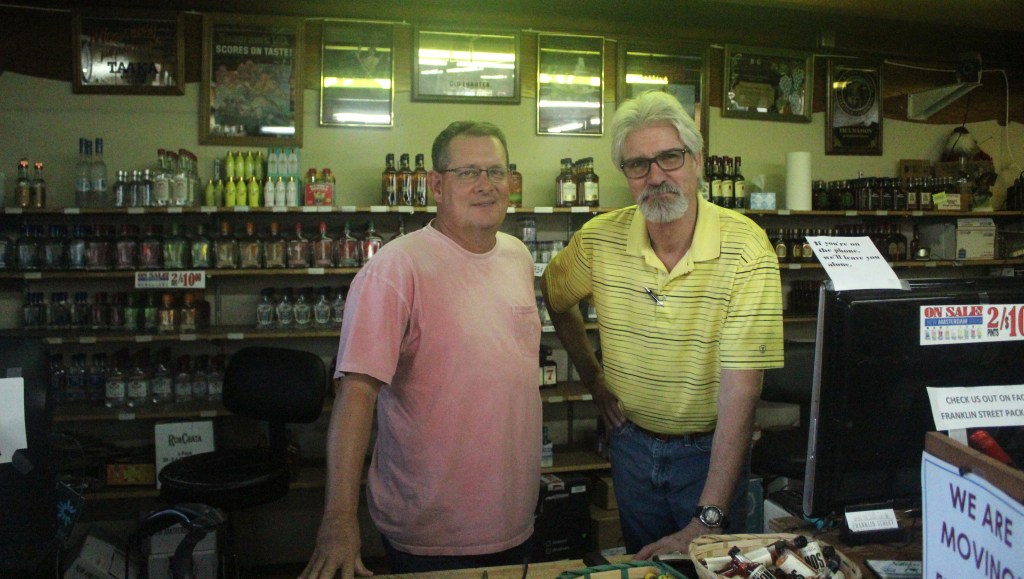 Tee Cotten, left, and Sam Jones, right, stand behind the counter at Franklin Street Package Store. They are excited for the move to Spirits of Natchez on John R. Junkin Drive. (Hunter Cloud | The Natchez Democrat)

NATCHEZ — Fifty-five years of history will come to an end on Nov. 1 when Franklin Street Package Store closes its doors .

Powell Kaiser opened the store in 1966, shortly after Mississippi lifted restrictions on the sale of alcohol. And state restrictions are why the store will close this month, as state law prohibits one owner from having two open locations at the same time.

Sam Jones, manager at Franklin Street, said he will be moving with the business to 303 John R. Junkin Drive, where Spirits of Natchez will open in early November.

The new location was originally a bank before it was used as a chiropractic clinic.

“There is a lot of opportunity there, but we are going to hate leaving here,” Jones said. “They love us. We know practically everyone who lives here … It’s going to be bitter sweet.”

Franklin Street Package Store’s current owner is Bubba Kaiser, and he was the driving force behind the expansion and move, Jones said.

At Spirits of Natchez, the larger location will allow for a wider wine and liquor selection. The bank’s old drive through will enable Spirits of Natchez to offer curbside service, which has been legalized in Mississippi..

“The vault will be a walk-in cooler for us and you can choose a chilled white wine or champagne,” Jones said. “All of the inventory moves from here and we have ordered some new options.”

Jones said closing the doors on Franklin Street Package leaves many memories and stories behind. Jones recalled one customer who tried to return a 1.75 liter bottle of Scotch after drinking a third of it because she didn’t like it.

“I often wished I would have written notes of what happens here so I could start a comedy skit,” Jones said.

Spirits of Natchez is expected to open the first week of November.

“We are very excited to be doing this,” Jones said. “I think we are going to do some great things.”