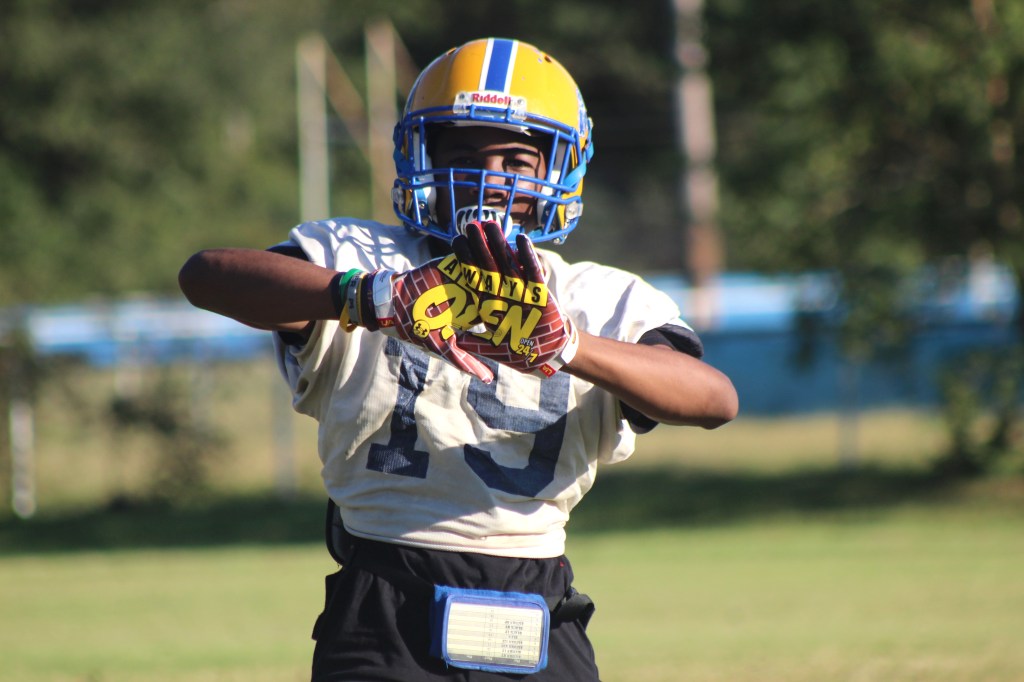 Demarcco Blanton holds up his gloves which say “always open.” He has become a real threat in the wide receiver position this season. (Hunter Cloud | The Natchez Democrat)

NATCHEZ — When Brookhaven High School makes the trip down U.S. 84 to Natchez, they will be walking into a game which has major playoff implications. Head coach Randy Craft said if Natchez wins they have a shot of making the playoffs.

This shot would require some help from Laurel. They must lose their next two games for the Bulldogs to have their best chance of making the playoffs.

Brookhaven will be a tough opponent.

“Last year it came down to three points,” Craft said. “Having an opportunity to defeat them would keep our playoff hopes alive.  It would be great if we can beat them.”

Ole Brook uses a run heavy attack. The Panthers have a strong offensive line and a quarterback who is a dual threat. He can beat the Bulldogs with his legs, his arm and his good decision making, Craft said.

Natchez is a dual threat offense as well. Mike Williams and Josh Thomas are threats in the receiver position as is Demarcco Blanton. Quarterback Kyreek Murray is developing quite well each week.

At running back, Traylon Minor has put the team on his back and carried them.

“We knew our receivers would be our strong point,” Craft said. “Mike had a great year last year. Demarcco has come on strong this year. He is having a good season. Traylon is big in our running game. He keeps us on time and we can move the ball and get first downs. It keeps the defense off the field and the momentum in our favor.”

Last week, Natchez put in a good performance against South Jones. The Bulldogs won 30-6 and played a good clean football game. Offensively, they did not turn the ball over and forced a few turnovers from South Jones.

If they can force Panther turnovers they would have a good opportunity to beat Brookhaven Friday.

Homecoming is a possible stumbling block for Natchez High School, but Friday night they will do their best to stay focused, Craft said.

“We have to stay focused on the game,” Craft said. “On Friday at 7 o’clock, it is time to play ball.”