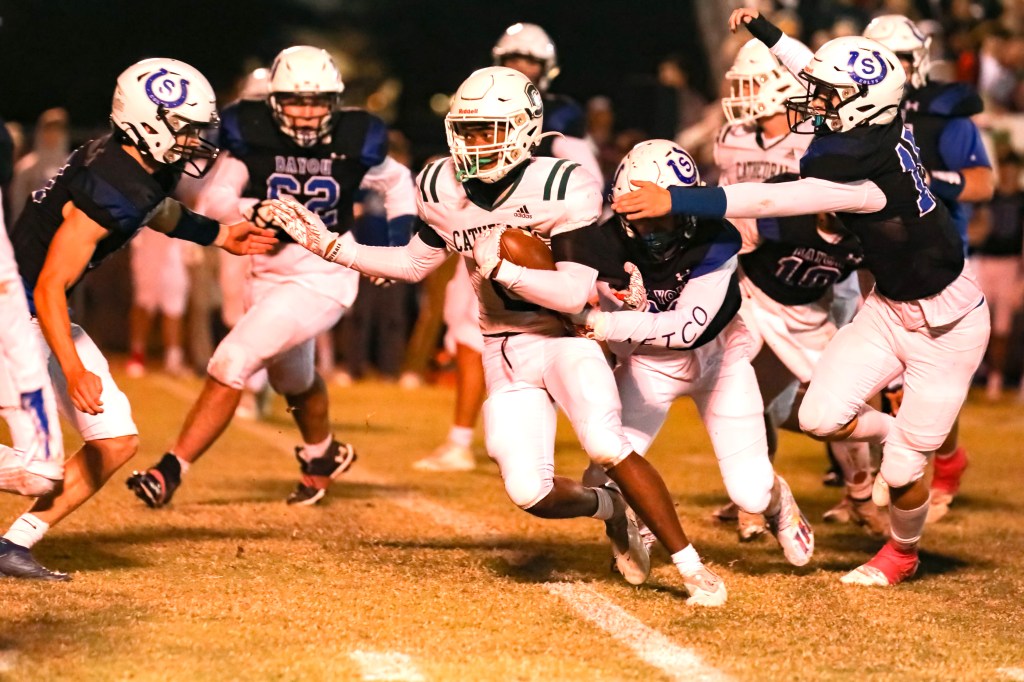 CLEVELAND — The Cathedral High School Green Wave saw its 2021 season come to a bitter end Friday night as they lost to the Bayou Academy Colts 34-6 in the first round of the MAIS Class 5A Playoffs.

Cathedral entered the playoff as the No. 12 seed while Bayou Academy was the No. 5 seed. And the Colts, led by running backs Joseph Smith and Alford Hill as well as quarterback Larson Ingram, showed why they are one of the top teams in Class 5A.

Bayou Academy (9-2) jumped out to a 7-0 lead in the first quarter. Smith scored on a 1-yard run to give the Colts a 14-0 lead with 9:36 to go in the second quarter. They had a chance to increase their lead as they had a 1st-and-goal at the Cathedral 4-yard line with less than a minute to go until halftime. But the Green Wave defense kept them out of the end zone.

“We moved the ball well in the first half, especially the second quarter. But we finished one drive with an interception in the end zone. Two other times we couldn’t convert on 4th-and-1 and 4th-and-2,” Darbonne said. “The interception play was my fault.”

Darbonne said his team executed well offensively, but not being able to make the big plays when they had the chance proved to a key factor. So was the decisive third quarter, when the Colts put up 20 points to put the game out of reach.

“We had some mental mistakes. We had some turnovers. It got quick in the wrong way,” Darbonne said. “(And there were) penalties, after-the-play penalties. We didn’t play as disciplined as we normally do and they took advantage of it. I thought we played hard. The third quarter, those mental mistakes put us in a bad spot and we weren’t able to recover. (It was) just lapses in judgment.”

Cathedral made sure it would not be shut out when Noah Russ threw a 22-yard touchdown pass to Christian Wright with 7:39 remaining in the game.

Cathedral finished its season with an overall record of 4-7.