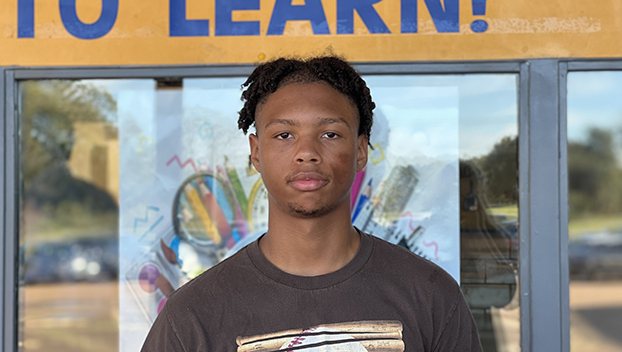 Harris, the son of Tunisia Felton and Frederick Harris, competed in the AAU Junior Olympics in the Track & Field event, which was hosted at George Turner Stadium in Texas in August. (Sabrina Robertson | The Natchez Democrat)

NATCHEZ — Robert Lewis Magnet School 8th grader Christian Harris said he is open to trying new things and giving them his best shot, “Just to prove to myself that I can do it.”

Harris, the son of Tunisia Felton and Frederick Harris, competed in the AAU Junior Olympics in the Track & Field event, which was hosted at George Turner Stadium in Texas in August.

Harris said he started playing football two years ago and later joined the Track & Field team to get faster. He currently plays linebacker and will soon join Natchez High School team, he said.

Like he does in all things, Harris said he pushed himself to do his best in track and

realized he was good at it.

“Once I started running regional, I went to the track meets and started placing and it became a part of what I wanted to do.”

Harris said the experience of seeing that many people compete was exciting.

Harris said he plans are to continue to train and compete in sports to increase his scholarship options.

If he could do anything, Harris said he would like to play professional football.

His favorite player, he said, is Jonathan Taylor, who plays running back for the Indianapolis Colts.

Sports are not the only thing that Harris is interested in.

“I just started playing piano and violin this year,” he said. “I’ve always had an interest in music but started taking it seriously when school started.”

Harris also excels in all of his classes academically, but his favorite is English.

“I like that it isn’t bound to strict rules like math or science,” he said. “I enjoy writing poems. Usually for class but sometimes just for fun.”