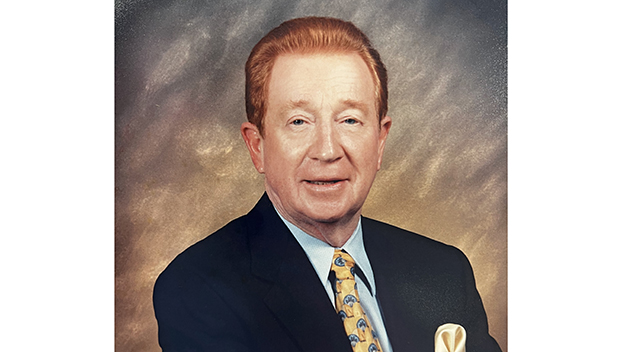 Wallace Burnell “Bernie” Pyron died peacefully at his residence, in Natchez, MS, on Oct. 25, 2021, surrounded by loving family. Visitation will be Friday, Nov. 5, 2021, from 9 until 10:30 a.m. at Parkway Baptist Church, Natchez, MS, followed by a Celebration of Life service at 10:30 a.m., with Rev. Jonathan Bost presiding.

Bernie was preceded in death by his parents, Sue and D. Wallace Pyron, and his beloved sister, Suzanne Pyron Womack.

“My cup overfloweth” Psalm 23:5, was Bernie’s life motto. His life adventure began on Aug. 21, 1936, with his birth to Sue and D. Wallace Pyron in Shelby, MS, in the Delta. He lived an almost idyllic early childhood on Pitchfield Plantation, Shelby, MS, where his father farmed cotton and raised horses. It was easy to find little Bernie on the plantation as his red hair was visible from miles away, red hair that he had all his life! Bernie loved horses. He had his own black horse, a wagon, a mule and a farmhand’s son to play with!

In 1945, his Uncle Kelly Pyron convinced Wallace to move to Natchez and start selling furniture with him because Natchez was growing, and people needed furniture for their new homes. So, Wallace sold Pitchfield Plantation, bought Traveler’s Rest pastureland (for his horses) in Adams County, loaded the family in a pickup truck, and moved to Natchez.

With Wallace joining his brother, Kelly, in Natchez, the Pyron furniture business took off and lasted for generations! Meanwhile, Bernie attended the Natchez public schools. At Carpenter #2 elementary school, Mrs. Prince was his favorite teacher. At Natchez High School Bernie played saxophone in the band. He rode horses with his sister and enjoyed a fulfilling social life as a teenager. For his high school graduation in 1955, Bernie’s parents gave him a beautiful, limited-edition pink and white Ford convertible for his drive to State Teachers College (now University of Southern Mississippi) in Hattiesburg, MS. He studied business at Southern and pledged Kappa Sigma fraternity, but decided to transfer to Bowling Green Business School in Bowling Green, Kentucky, to complete his business education. Following graduation from Bowling Green, Bernie returned to Natchez and worked for National Life and Accident Insurance Company for six years before joining his dad in the furniture business.

Bernie was baptized as a young man and made sure that his children were reared as Christians in Parkway Baptist Church, Natchez, MS. Every time the church doors were open, the Bernie Pyron family was there! He took an active role as father to his children. The boys loved deer and turkey hunting at the camp with dad. Whereas, Susan loved dancing. Bernie never missed his lovely daughter in a dance performance. His Godly legacy will endure through his children (David, Susan and Blair) and grandchildren, (Anita Maria and Wrenley).

The city of Natchez has been greatly influenced by Bernie, through his personal life, business dealings, religious pursuits, and civic duties. He is most proud of his 53 years in business, Bernie Pyron’s Furniture Company, corner of St Catherine Street and Fourth St., Natchez, MS. Bernie was a member of several business and civic organizations, often serving on the Board of Directors: the Natchez Chamber of Commerce, the Natchez Kiwanis Club, Mississippi Furniture Association, Natchez Regional Hospital (Board of Directors for six years). As a young man, he joined the Mississippi National Guard and was called for active duty during The Berlin Crisis, 1958-1959. He was very proud to be a 31-year active member of Alcoholics Anonymous where he helped many people remain sober, lead better lives, and be inspired through his Christian life and example.

Bernie, most recognizable by his red hair, felt very blessed to have travelled the world. He visited all over the USA and the world (Spain, Portugal, Austria, France, Switzerland, Israel). While in Israel in 2020, Bernie was baptized for the second time in the Jordan River, right where Jesus was baptized by John the Baptist. Bernie was a wonderful example of a Southern gentleman for all the world!