THE DART: ‘If I ever leave Natchez …’ Retiree finds music, hospitality and community here 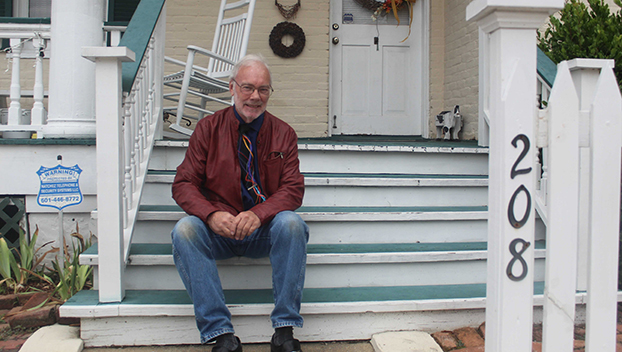 Kim Marshall sits on the front steps of his cottage on North Union Street. After teaching for 45 years he is now retired and enjoys walks downtown. In his living room he recorded an album with his neighbor and friend Rex Pruitt. (Hunter Cloud | The Natchez Democrat)

A native of Abbeville, Louisiana, he attended the University of Southern Louisiana before joining the U.S. Marine Corp. After his time in the service, he moved to Houston where he worked as a therapist. Marshall said he had an apartment close to St. Thomas College in Houston where he re-enrolled in classes. Then he made the move to the University of Florida where he got a masters and a PHD in sociology. After some time at Syracuse and getting his masters in business administration at Washington University in St. Louis, he decided to become a teacher. Loyola and Jackson State were prior teaching stops before he took the job at Alcorn State. Sociology is closely related to business, he said.

“They draw heavily on social science knowledge. Most of the research in business is sociology based,” Marshall said. “The fields are very closely related. I got much more interested in the business world. The social sciences are still very very close to my heart.”

Combining his computer background, sociology and business knowledge he wrote a book about marketing systems. He became the editor of a journal about government programs and policies for technology.  “I see a lot of the principals I was talking about back then are in practice now,” he said.

In August 2019, he retired from teaching. Now, he splits his time between beach houses in Gulfport and his cottage in Natchez. After Katrina, he had to go to a meeting in Gulfport and could not get over the devastation the storm left.

“Now I go back and forth between them,” Marshall said. “It has been amazing to see how the homes are being rebuilt on Beach Boulevard.”

When he is in Natchez, he can walk downtown to the Natchez Coffee Shop, the bank and restaurants. He is Catholic and attends Holy Family in Natchez where he is a member of the Knights of Peter Claver. As a retiree he has no other obligations, he said.

“Yet I find myself not getting as much done,” Marshall said. “Someone told me it is because when you retire you lose a lot of structure in your life.”

Natchez is also similar to his hometown of Abbeville, he said, specifically the older homes and friendly people. Since his retirement he has taken chances to travel but he always finds his way back to Natchez, he said.

“Natchez is a wonderful place to live,” Marshall said. “It is so pleasant and friendly. I like the overall ambiance and friendliness of the town. There is a lack of traffic. Not to mention there is a romanticism of living right on the Mississippi River.”

This same romanticism inspires the music and art found in Natchez, which he enjoys. When he first moved to Natchez, Rex Pruitt lived in the cottage next door. Knowing he played guitar, they got together a few times to play, he said.

In Marshall’s living room, they recorded an album called “Pretty Good Guitar” together which you can find on CDbaby or YouTube. Three of the songs were written by Marshall, four by Pruitt and three were by Judith Curry who was from Tennessee, he said.

The title song kicks off the album “He always played pretty good guitar. He played all the honky tonks and bars.” The song follows the journey of music from Mississippi all the way out to California and even the Beatles.

“When he first heard it, he was really quiet for about 30 seconds or so. He said, ‘That is the story of my life,’” Marshall said. “He identified with my song and we went ahead with making the CD. I wasn’t in it for the money, I was in it for fun.”

Pretty Good Guitar ends with the song “Staying Here in Natchez,”  and was written by Rex.

“The last song had a catch line. ‘If I ever leave Natchez, I’ll be glory bound,’” Marshall said. “Sure enough, Rex’s wife wanted to move to Texas to be closer to family and they moved. A year later he was diagnosed with cancer and died six months later. If he ever left Natchez he was glory bound. I kind of feel the same way.”