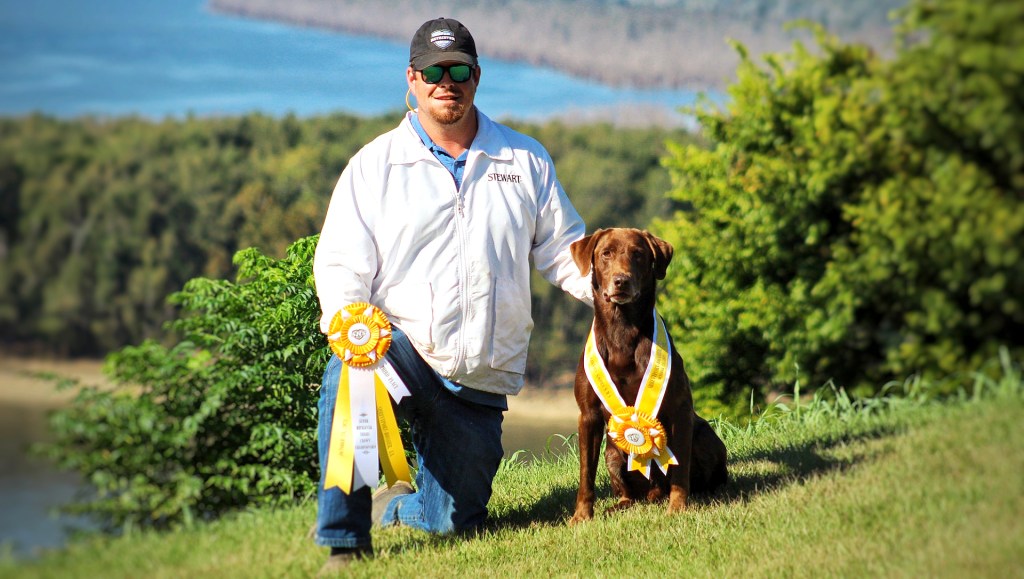 Stewart Williams and his dog Stormy finished third for the second time at the Super Retriever Series Crown Championship last Sunday. The competition challenges dogs to retrieve plastic bird dummies called bumpers in a combination of hunt tests and field trials. This photo was taken on the bluffs in Natchez overlooking the Mississippi River. (Submitted Photo | Stewart Williams)

BOSSIER CITY — Natchezian Stewart Williams and his retriever Stormy finished third in the Super Retrievers Series Crown Championship last weekend. As a team, they were judged on how they handled field trials and hunting scenarios, marking and memory, line manners and control.

Competing against 35 other teams, Stormy and Williams made it into the final six in four days.

“When you get to this level the dogs are all qualified,” Williams said. “Any dog there is capable of winning the week-long event. To win, you have to have the best luck of weather, wind and it comes down to who makes the fewest mistakes. We couldn’t catch a break in 2020.”

Five years ago, Stormy was strictly a field trial dog. Williams said he got together with his friend Leo Joseph and put their knowledge together to train Stormy to compete in both hunt tests and field trials.

All year they train for the Super Retrievers Series Crown Championship. He said SRS is a competition looking for the most versatile retriever in the country. Dogs run through hunt tests and field trials at the competition. Hunt tests are simulations of hunting scenarios and cover a shorter distance about 150 to 200 yards. Field trials are more concept based, he said. Dogs can cover anywhere from 30 to 500 yards to retrieve plastic bumpers or bird dummies.

“You have to keep everything sharp. Balance is the key there,” Williams said. “Leo Joseph with Rivertown Retrievers and I started training together about two years ago. He wanted to go pro and train for a living. We have a good relationship and are good friends. I’m fortunate to call him my friend. I’m thankful for the opportunity. He deserves a lot of credit.”

Williams is hoping for a first place finish at some point. While he finished 190 points shy of first place this year, he did not lose sight of the moment last Sunday.

“You get so tangled up in the moment of the event. You train all year getting ready,” Williams said. “On Sunday as we were getting ready to run the finals I just got to thinking about it and was grateful to be there. It’s been a blessing. You meet a lot of people in the dog world. It has opened a lot of doors for me. Stormy is far from calm and collected. They know what training is. When you get to the events he turns into a maniac. You get that many dogs in the same area they know what time it is.”

‘Playing as we go’ Green Wave duo poised to…