IN THIS TOGETHER: Friends bond through breast cancer experience, encourage other women by sharing their story 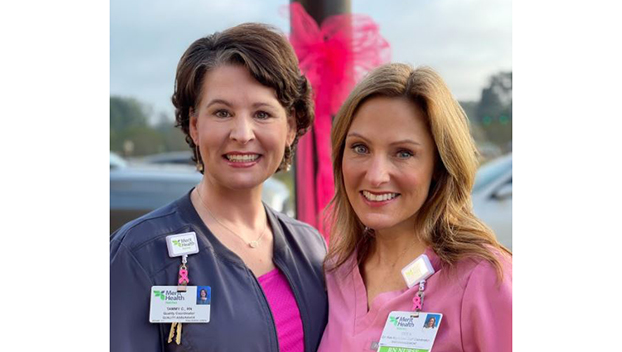 Tammy Cranford and Dee Ham, both nurses at Merit Health Natchez, were diagnosed with breast cancer in 2020.

They are both registered nurses who work together in the Quality Department at Merit Health Natchez. They are friends, mothers and wives who, like so many women, put their needs and wants aside to focus on their families and work tirelessly each day in their professional careers and home life responsibilities.

One thing they never expected to have in common was breast cancer.

First, they are both strong advocates of every woman doing regular self-examinations and annual mammograms, regardless of your family history.

Cranford said when she discovered her lump first on April 1, 2020, she didn’t hesitate to get it checked, which may have saved her life.

“It was time for my screening and they changed it to a diagnostic screening instead,” she said. “When you know, you know. I had two or three biopsies before and they were benign. With them, I didn’t have that alarm go off in my head, but this one I was worried about. … It’s hard to explain. I cannot stress enough the importance of self-exams. It may have been another year before I had another mammogram.”

Secondly, Cranford and Ham are using their stories to encourage others like them to let them know they are not in it alone.

Having been close coworkers in the same department for four years, Ham said she was in the room with Cranford when she received her diagnosis at Merit Health Natchez.

COVID-19 had just hit hard and the hospital couldn’t allow visitors, however, Cranford said she was able to lean on her friend and work family for support.

“After reading my pathology report, I felt this overwhelming sense of doom,” Cranford said, adding she felt grateful that she wasn’t alone.

“I have a wonderful family and work family and a strong faith in God and I knew I was going to get through it. I was diagnosed right when COVID was getting started. No one could be at the hospital with me. It was rough on me, my husband and my children too. I praise God every day for my work family who could check on me.”

Within two weeks of the initial mammogram, followed by a biopsy, Cranford had a bilateral mastectomy and a diagnosis of invasive ductal carcinoma. Cranford began chemo treatment on May 14 and received her last chemo treatment Oct. 22.

Ham also felt her lump through self-examination. At the time, she felt ill and was isolating at home.

“I felt sick and tested for COVID, flu and strep. It all came back negative and I wasn’t sure what it was. I felt the tumor. It was new.  I’ve never felt it before. I had a sick feeling in my stomach.”

Ham said she returned to work in early October when they were discussing breast cancer awareness month and mammograms and realized she needed to be checked.

She was scheduled for a mammogram and an ultrasound the next week on Oct. 8.

When she heard bad news, Ham said she reacted differently than her friend had.

“My best friend Angela Yates’ office sits between mine and Tammy’s. I knew the news would not be good and she stayed in the room with me when I got the news and went through all of my options. She cried and I didn’t. It was late in the afternoon by that point and I told them I have a nail appointment and I have to go. I was in a shock and was like that for days.”

She didn’t immediately tell Cranford, who was still at home and very sick when Ham was diagnosed. Ham didn’t want to unload anything else on her friend’s plate, she said.

Ham said humor is her typical response for tough situations, but she eventually had to have some hard conversations with her family and the situation sunk in.

“I acted like everything is fine and it wasn’t. It eventually it does hit you. Especially when you’re a mom. You always think the worst. It’s not something a parent wants to think about. … I had this fear of having my kids watch me be sick.”

The ability to be treated near to home was another factor that made the cancer journey easier for Ham and Cranford, they said.

Ham had a double bilateral mastectomy surgery at Merit Health Natchez on November 6.

“I learned that you don’t have to leave Natchez to get cancer care,” she said. I’m ashamed as a nurse that I didn’t realize all of the options I had here. … I didn’t have to go through the long car rides and sitting alone in a strange hospital room.”

Cranford said having a close circle of people who knew what she was going through also helped.

“I was diagnosed first in April and was out when Tammy was diagnosed. I had no idea. When she told me, I can remember just hugging her. Everyone reacts differently. It has brought us closer together. I think breast cancer survivors have a special bond because of things we went through that no one else understands without going through it.”

“You can be the healthiest person and still get cancer. I don’t know how people do it without a close circle,” Ham said. “Anything I can do to make the next persons journey easier, I hope this encourages them. It important that you get your regular screenings and do all that you can to prevent something from happening to you. If you do get bad news, try to stay positive. … You’re not alone.”