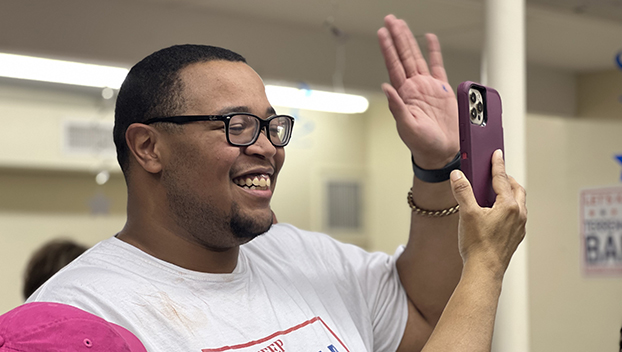 NATCHEZ — Terrence Bailey appears to be the winner of the Adams County Tax Collector race in Tuesday’s special election with 2,638 votes or 55.55 percent of the total votes, according to preliminary results.

Approximately 340 absentee ballots have already been tallied into the total.

Adams County Circuit Clerk Eva Givens said affidavit ballots will still need to be counted. She added she should know how many affidavits there are on Wednesday morning.

With more than half of the votes, Bailey would be the unofficial winner without need for a runoff election.

Approximately 24.6 percent of those registered to vote cast their ballots in Tuesday’s election.

Adams County Election Commissioner Larry Gardner said the last special election that he could recall also had a voter turnout of around 25 percent, which is low compared with most elections.

When the news of the results came in, Bailey was celebrating with his family, the staff of the tax collector’s office and other elected officials.

“It’s amazing, like all of my hard work has paid off,” Bailey said Tuesday night after learning he won. “I’ve been dreaming about this since day one, before I was appointed Interim Tax Collector. It’s my time.”

Bailey was named Interim Tax Collector in January after the sudden passing of Tax Collector Rose Patterson due to complications with COVID-19.

Bailey said he has worked in the tax collector’s office since 2017 and knows the job well.

He was a bookkeeper in Chancery Clerk Brandi Lewis’s office before working for Tax Collector Peter Burns.

As Deputy Tax Collector, Bailey said he was trained to follow in Patterson’s footsteps.

“It’s what we’ve always talked about. She would always say one day you’re going to be in this position and you’re going to use everything you know, and I did. I know she’s happy today,” Bailey said.

Bailey thanked the community for voting and believing in him to be the Tax Collector. He also thanked his opponents Butler and Harrison for running a clean race.

Going forward, Bailey said he plans to keep the citizens he serves happy by putting his best foot forward in the department.

“We picked the ball up and started rolling and we’ve made some pretty good changes already. We’ve got new kiosks and customer service training and going forward we’re going to keep this momentum going. We’re going to keep doing our best,” he said.