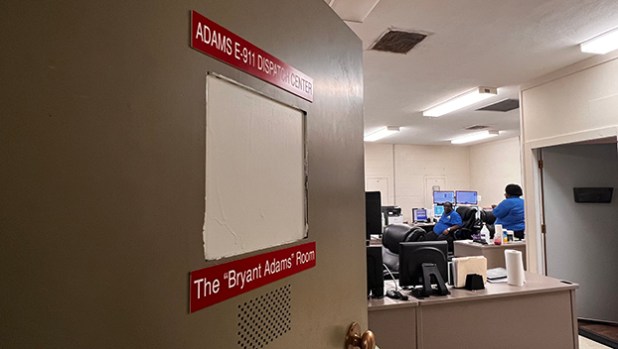 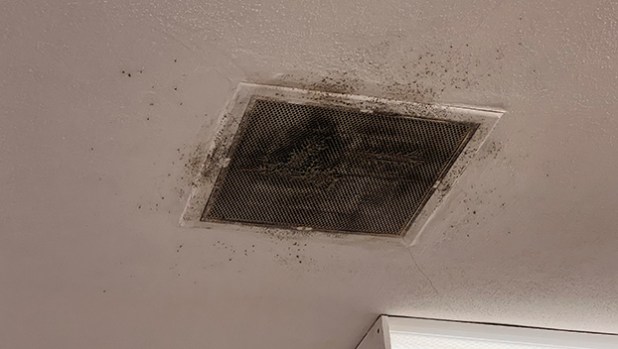 Mold grows on a ceiling vent in the Adams County E-911 dispatch office. 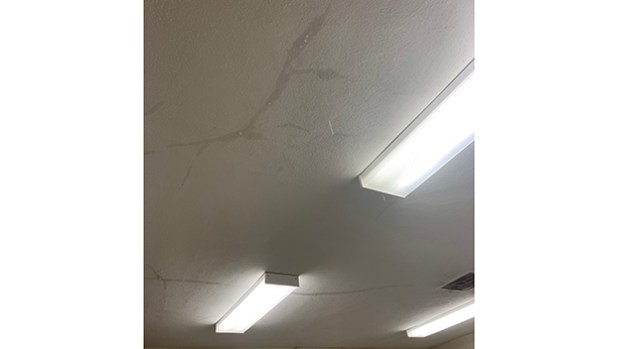 Water drips from the ceiling of the Adams County E-911 dispatch office.

NATCHEZ — The Adams County E-911 department sits in the basement of the Adams County Jail without windows and behind heavy metal doors. It has been housed there since 2017, when E-911 was consolidated between the City of Natchez and Adams County.

Anytime there is a ruckus upstairs, E-911 Dispatch Director Annette Fells said it can be heard loudly and clearly where the dispatchers work 12 hours a day.

At times, the bathroom upstairs floods and toilet water and urine rains down into the dispatch office through the ceiling and the light fixtures. This has left permanent brown stains, mildew and a musky smell even after thorough cleaning, Fells said.

“It’s like we’re in jail. The only difference is we get to go home after 12 hours and the inmates don’t. They shut us up in here. We don’t get breaks. We eat our lunch here,” she said.

These work conditions were brought up during Monday’s meeting of the Adams County Board of Supervisors as the board discussed the high turnover rate in the department.

On Monday, the supervisors agreed to hire four new dispatchers at a rate of $12 per hour while agreeing that employees who have been working there for a long time are not compensated enough. The department has about 14 people who work in shifts and Fells said she had to cut three shifts down to two after some employees quit without notice.

“We need to do better,” Supervisor Ricky Gray said of the department’s pay rate.

Fells said she also had trouble finding people to work after they saw the work environment.

“I had two people excited about the job and once we brought them in and filled out the paper work I haven’t heard from them since,” she said. “We have people working upset about the pay because people are coming in without the training and experience and making the same amount of money they make.”

Adams County Sheriff Travis Patten also spoke of the condition of the Adams County Jail building on several other occasions. In September, he asked the board’s permission to do an analysis of the jail facilities and determine the cost and feasibility of building a new one.

Supervisor Kevin Wilson acknowledged the poor condition of the building during Monday’s meeting.

“The place you are working out of is a disgrace,” Wilson said to Fells. “It is important that we get this worked out. We’ve got to take care of this group of people and make that a priority.”

Fells, who began working as the E-911 director in March 2020, said she met with the Board of Supervisors specifically about the office conditions at least three times.

Board President Angela Hutchins said she, Natchez Mayor Dan Gibson, their lobbyists and other officials would be traveling to Washington, D.C., later this month to meet with U.S. Rep. Bennie Thompson and other congressional leaders about several city and county projects.

Hutchins said they would be discussing a workforce development center, Morgantown Road, the Natchez Adams County Airport runway rehabilitation and suggested adding the Adams County E-911 office to the list.

Fells also requested a department vehicle that dispatchers could drive back and forth from training instead of using their personal vehicles.

Fells said when she took over as E-911 director, she immediately set to work see that all of the employees were properly trained and certified. For dispatchers, that means driving to different certification classes across the state at taking 48 credit hours of classes in six focus areas every three years, she said.

A vehicle could be purchased for $26,000 and the state reimburses the department for miles incurred when traveling for training purposes for up to four people in a vehicle, officials said.

The supervisors discussed allowing E-911 to use another county owned vehicle in lieu of buying another one. They also said the City of Natchez should be involved in the decision since E-911 is consolidated with the city and county.

The board took no action in regard to the vehicle during Monday’s meeting.