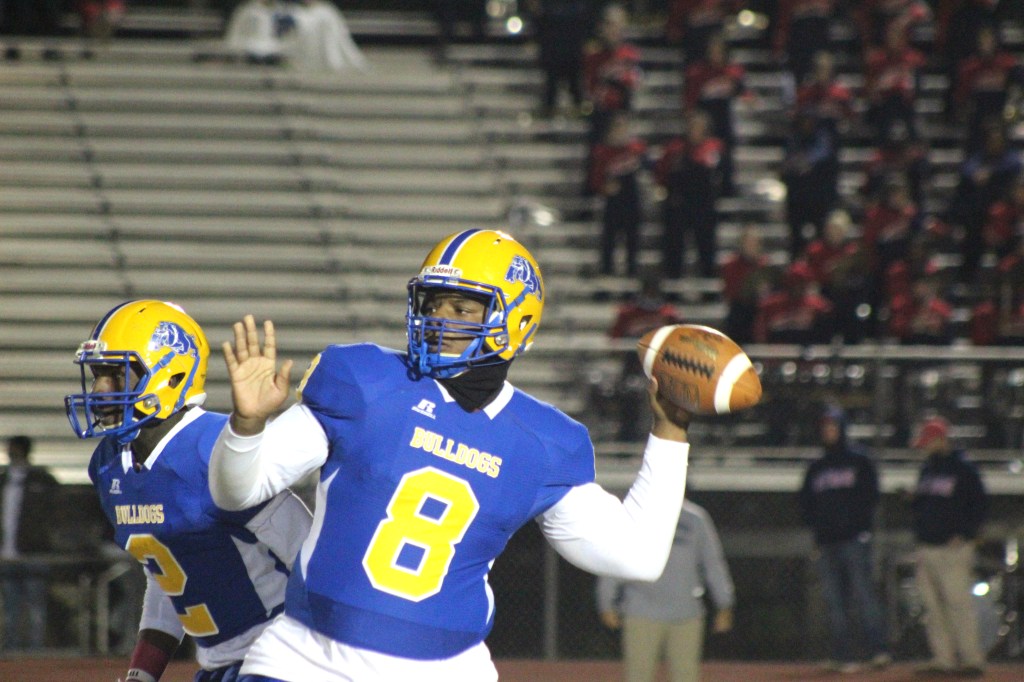 Quarterback Kyreek Murray was named to the MHSAA 5A Region 3 All-Region team with 11 other teammates this week. (Hunter Cloud | The Natchez Democrat)

NATCHEZ — Both the Florence High School Eagles and the Natchez High School Bulldogs will be playing for pride when the two teams square off Thursday night at Tom F. Williams Memorial Stadium in the MHSAA Region 3-5A and season finale for both teams.

Florence, one of the newcomers to Region 3-5A, is on a seven-game losing streak, but played its best game in nearly two months last Friday night in a 28-26 loss at home to South Jones High School. The Eagles enter this game at 1-8 overall and 0-6 in region play.

“We play in a tough region. They’re playing with nothing to lose. We have to be prepared for everything – reverses, trick plays,” Natchez High head coach Randy Craft said.

Natchez High was hoping to keep its slim playoff chances alive last week when the Bulldogs hosted Brookhaven High School for homecoming, but those were dashed as the Panthers came away with a 49-20 victory that dropped them to 4-6 overall and 1-5 in region play.

Now the Bulldogs have a short week to prepare for an Eagles team they don’t know much about.

“We played a physical team last Friday, so you have less time to heal and less time to prepare,” Craft said. “But we’re going to work on what we’ve been working on the last couple of weeks. So that helps.”

Bulldogs quarterback Kyreek Murray, one of seven seniors on the team who will be honored on Senior Night, will look to have a bounce-back performance after completing just 14 of 32 passes for 141 yards and one touchdown while being under immense pressure throughout the game by the Panthers’ defense.

“Hopefully he will,” Craft said. “He’s a senior. I look for him to have a big game to cap off his career here at Natchez High.”

Florence runs a spread offense out of the shotgun formation. Defensively, the Eagles use a 3-4, two-high safety defense. The good news for Natchez High is that junior center Landen Sewell will be back for this game.

Craft said the offensive line will need to get back to playing as well as it did a couple of weeks ago and that Sewell will need to have a big game. He added that defensively, the Bulldogs will need a big game from Jakeel Irving on the inside.

As for what each side of the ball will have to do for Natchez High to end its season on a high not, Craft said the offense cannot turn the ball over and has to control the clock while the defense will need to create three or more turnovers and limit the big plays.