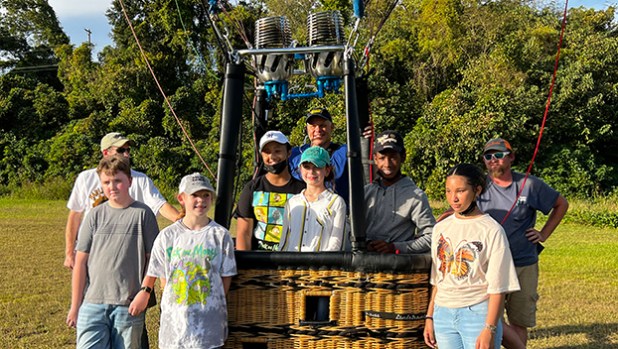 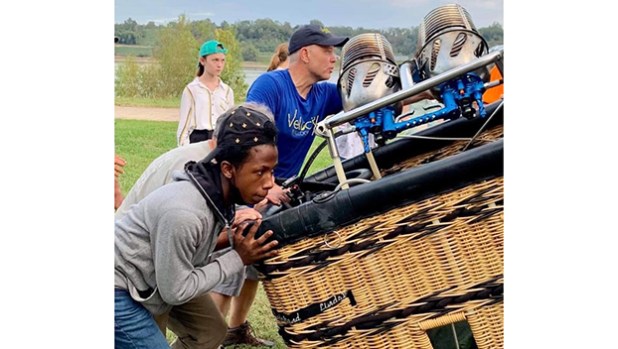 Jeremiah Minor helps push a hot air balloon basket into a trailer after a Tuesday afternoon flight. Minor is one of the six students in Elizabeth Greer’s class at Robert Lewis Magnet School who won an essay contest to be able to fly in a hot air balloon on Tuesday. 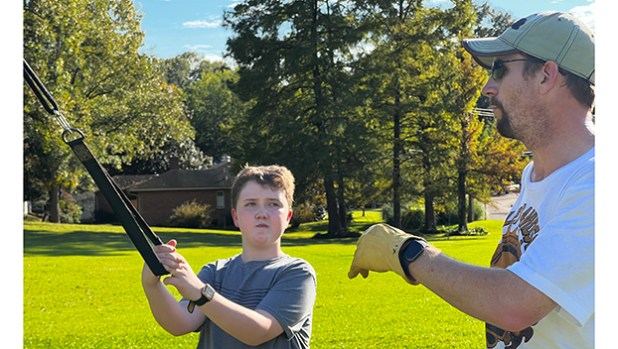 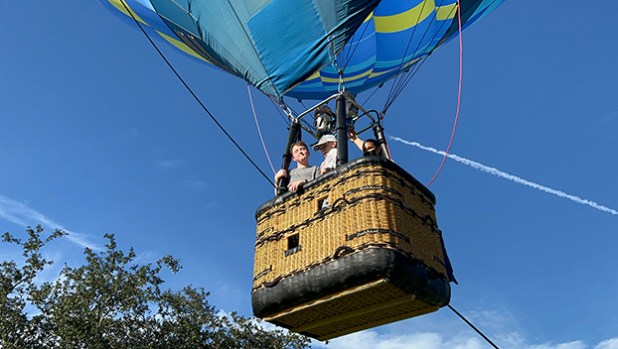 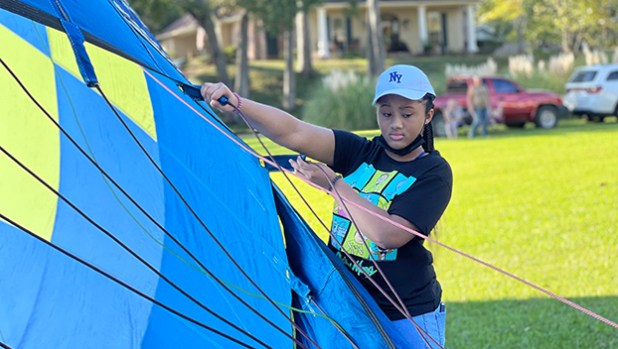 Gerren Smith holds the envelope of a hot air balloon open to inflate it. 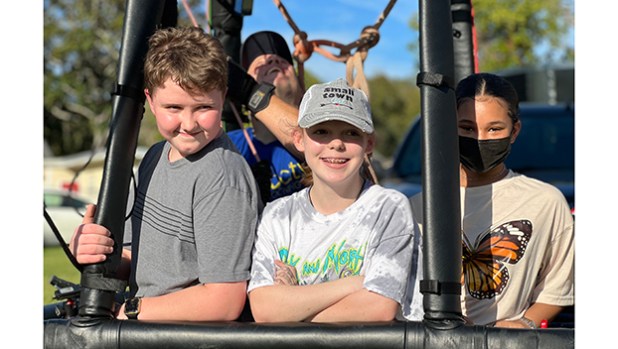 Pictured from left are Robert Lewis Magnet School students Triston Floyd, Alyssa Nelson, and Kendra McDonald in the basket of a hot air balloon before their first flight. 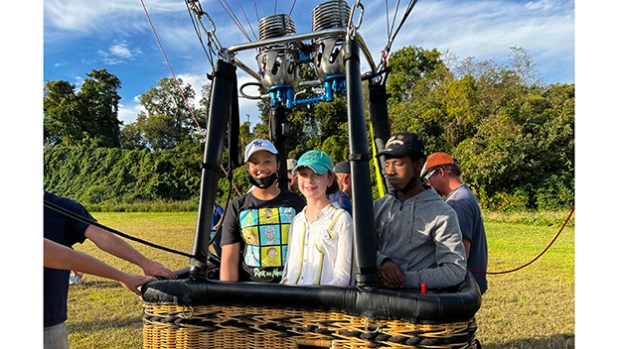 Pictured from left are Robert Lewis Magnet School students Gerren Smith, Emma Davis, and Jeremiah Minor in the basket of a hot air balloon before their first flight. 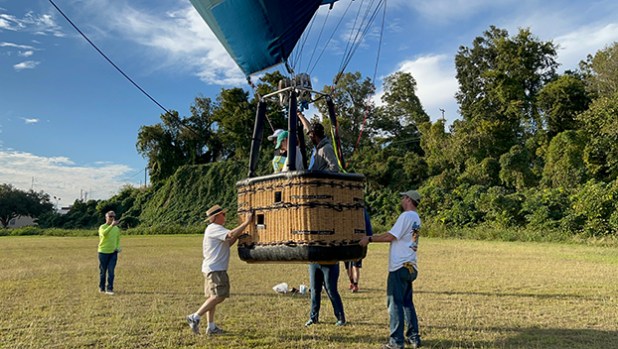 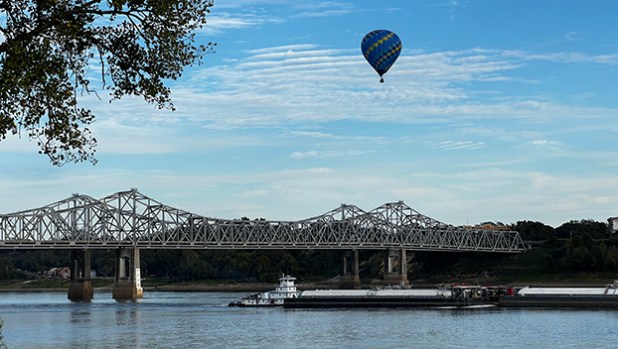 NATCHEZ — Many in the Miss-Lou saw nearly 40 different hot air balloons fly during the 36th annual Natchez Balloon Festival just two weeks ago, but for students at Robert Lewis Magnet School, the fun didn’t stop there.

Kurt Vitense, a pilot from St. Peters Missouri who purchased a home in Natchez earlier this year stayed longer before and after the festival to help Elizabeth Greer’s “Project Lead the Way” Engineering Class learn more about flying.

“It’s a brand-new program being offered this school year,” Greer said. It just so happens that on the cusp of the Natchez Balloon Festival, her classes’ topic of study was aviation.

It didn’t take much persuading for Vitense to agree, Greer said.

“From the moment I approached Captain Kurt about bringing his hot air balloon to RLMS and demonstrating the science concepts of mass, volume, and density, I could tell he was almost as excited as my students,” she said. “It was a beautiful day outside as the students gathered near Captain Kurt’s basket to see up close the massive propane burners that heat the air inside his balloon, causing it to lift.

“The first time he pulled the lever and fired up the massive flames my students instinctively ducked out of the way — realizing first-hand the massive amount of heat and energy that is required for a balloon to lift off the ground and fly. … Like most of us in Natchez, my students have seen the balloons soar overhead; however, having the opportunity to watch and learn each step of the inflation, flight, and deflation process was definitely a unique experience.”

After reading their essays, Vitense selected six students to fly with him in a hot air balloon on Tuesday. The winners who got to fly are Emma Davis, Triston Floyd, Kendra McDonald, Jeremiah Minor, Alyssa Nelson and Gerren Smith.

Vitense said the aviation industry is experiencing a shortage of pilots and he wanted to spark an interest in aviation in a younger generation. Vitense also wanted to show them that involvement in hot air ballooning is not out of their reach, he said. Anyone in Natchez can be involved in the Natchez Balloon Festival as a volunteer or crew member, and some pilots are generous about giving flights to their crew, he said.

“They see the balloons flying the sky, but I want to get the word out that it’s something accessible to them. No experience necessary. Anyone can be involved in this,” Vitense said. “I want to spark interest in aviation. But beyond that, here in Natchez with the balloon festival, I want to see it represent the diversity in the community. This is an opportunity for these students to be involved.”

Thanks to Greer’s class, Floyd said aviation is his new life’s dream — and thanks to Vitense, he knows that dream is not out of his reach.

“My aunt claims that I flew right above her house, but really I think we were at least 500 feet away from her,” he said. “I never thought I would be 2556 feet in their air. But, well, like Captain Kurt said, everything is possible. If I had the chance to do it again, I would not hesitate to fly with Captain Kurt in his hot air balloon.”

Nelson said she spent the night feeling nervous about the flight and was surprised by how cool it was when she finally flew.

“As the balloon went in the air, I was really surprised that I wasn’t really, really scared,” she said. “Some of the things I remember about the ride was that all the cars looked like toys. I could even recognize some of the buildings from up there.”

“Riding Captain Kurt’s hot air balloon was a great time — even though it was somewhat scary at first. Then my fears went away as soon as we got up in the sky,” he said. “When we were 1,000 feet in the sky, everything was small like ants on the ground. During the ride I was so impressed that I thought I was just dreaming of riding in a hot air balloon and not actually there.

“When we were crossing the Mississippi River, I was so scared. I thought, ‘What if the balloon was going to drop in the water?’ But it did not. … It was one of the best times of my life, and I will never forget about it. I know I will always want to ride again.”

Davis marveled at the view from above the Mississippi River before the students landed at the RV Park in Vidalia Tuesday evening.

“From almost 1,000 feet in the air everything was different, especially crossing over the Mississippi River,” Davis said. “It was beautiful, and a perspective that I have never seen before. Everything was so small and looked like tiny ants. Through the ride I was thinking about how fun it was and also freaking out a little on the inside because I was so high up.”