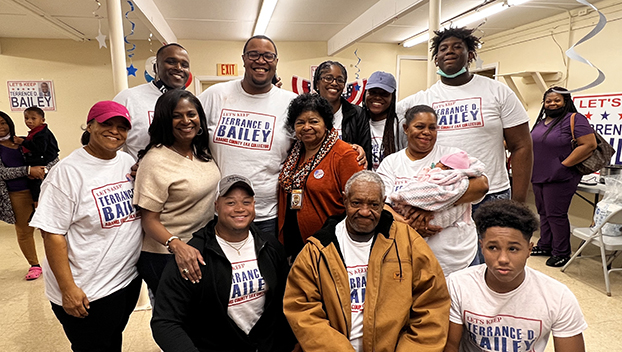 In an updated count on Wednesday morning, Bailey is ahead with 2,658 votes to Glenn Harrison’s 1,737 votes and Calvin Butler’s 439 votes.

However, Election Commissioner Larry Gardner said it could be next week before results are certified by the election board as affidavits are still being processed. Even so, it is unlikely that enough affidavits will turn up to affect the outcome, Gardner said.

“We’ve only found two affidavits so far,” he said. “We haven’t opened them up because we don’t want to know how they voted until we have them all. By law, we have to allow five business days after the election for people who voted by affidavit to come up and prove they have voter ID. In addition to that, if you mail in an absentee ballot, even if it comes in the mail after the election, as long as it has been postmarked by the day before the election, we have to count it.”

On Tuesday night, unofficial election results did not come in until approximately 10 p.m., three hours after the polls closed. Gardner said this was because a memory card in one of the voting machines at the Kingston voting precinct would not read properly and caused the server to freeze up. The results from that machine weren’t included in Tuesday night’s results but were added to this morning’s total manually, he said.

The one voting machine recorded another 91 votes, giving Bailey another 22 votes, Harrison another 65 votes and Butler another 4 votes — not enough to overturn the election results.

The bad memory card had no impact whatsoever on the current count for the State Senate District 38 race, which did not include the Kingston precinct, Gardner said.