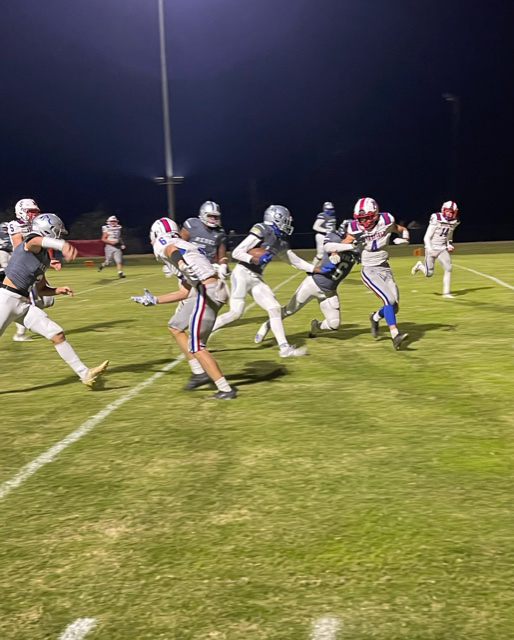 NATCHEZ — Coleman Carter’s 42-yard Hail Mary pass to D.K. McGruder at the end of the first half gave Adams County Christian School the momentum it needed as the Rebels pulled away for a 41-7 win over the Riverfield Academy Raiders Friday night in the MAIS Class 4A Quarterfinals.

ACCS had the ball at the Riverfield 5-yard-line, but four straight penalties against the Rebels pushed them further away from the end zone. And it looked like going into halftime only up 14-7 looked like a real probability.

But with one second left, Carter threw the ball as far as he could and McGruder made an unbelievable catch in the back of the end zone for the touchdown. J.J. Claiborne ran in for the two-point conversion to give the Rebels a 22-7 lead at the half.

Even though Riverfield racked up 193 yards on the ground, ACCS head coach David King said his team was up for the task.

“Defense was ready for the challenge. We were focused on stopping their run game and really did a good job this week,” King said.

Tiqi Griffen came up with huge touchdowns on both offense and defense in the second half. First, he had a 37-yard touchdown reception from Carter with 7:39 left in the third quarter to give ACCS a 29-7 advantage.

Carter ended up completing nine of 13 passes for 215 yards and three touchdowns. Claiborne was the Rebels’ leading rusher with 76 yards on 14 carries. Kaho had five carries for 46 yards and Carter had three carries for 32 yards. McGruder had two catches for 87 yards, Kaho had two receptions for 43 yards, Griffen had one catch for 37 yards, and Colin Cauthen had two catches for 25 yards.

“The playoffs, you have to have balance. We ran it more to set up the pass. The last time, we didn’t have enough healthy players because of a stomach bug to just run it at them,” King said.

Then with 2:18 remaining, he caught a pass that was deflected in the air and returned it 72 yards for a touchdown to finish off the Raiders. McGruder also had a defensive touchdown on a 13-yard fumble return with 2:49 to go after Riverfield attempted an ill-advised backward pass.

Jamar Kaho scored on an 18-yard run with 9:51 left in the first quarter to give the Rebels an early 7-0 lead. They made it 14-0 on Carter’s 15-yard touchdown pass to Jordan Berry with 7:32 left in the second quarter.

Brett Whorton, who provided the majority of Riverfield’s offense, scored on a 46-yard run with 2:44 left until halftime that made it a 14-7 game. Whorton had 15 carries for 146 yards. Quarterback Drew Holley was just 2-for-8 passing for 23 yards with one interception.

“Some of those were hustle plays, which we’ll take. There were a couple of mental mistakes,” King said. “Overall, the intensity was there. We got after it.”

Defensively, Dantavious Stampley had a team-leading six tackles. Kamron Barnes had four tackles and one sack. McGruder had three tackles to go with his fumble recovery.

ACCS (9-2) will play host to No. 11 seed Kirk Academy in the semifinals next Friday at 7 p.m. The Raiders from Grenada rallied late to upset No. 3 seed Brookhaven Academy on the road 45-38 Friday night.

“We look forward to another week,” King said.