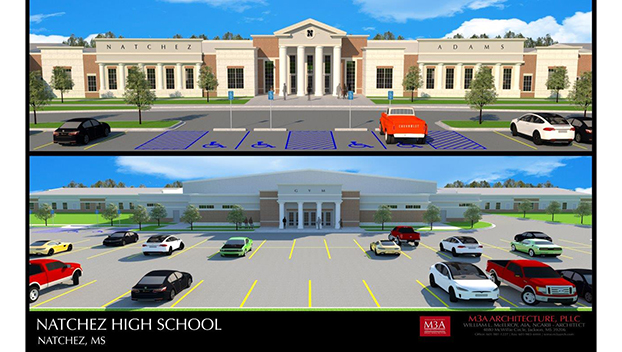 NATCHEZ — Security is a top priority for school board members as they hammer out the details of a $34 million project to build a new high school and renovate the former Natchez High School for a middle school.

During a special called meeting Friday, the school board reviewed details — large and small — of both the new facility and old high school, such as replacing the hinges and doors in the old high school that wouldn’t properly close otherwise, installing security cameras, updating bathrooms with electric hand dryers and more.

School officials plan to be able to move high school students into a new building and move middle schoolers to the former high school by spring of next school year.

Work on the new and old school building is well underway. Concrete foundation and framework for the new high school next the existing Natchez High School is already taking shape.

School officials said students are being “shuffled around” at the old high school while the work for what will be the middle school is ongoing.

Just before Thanksgiving, the cafeteria will be partially shut down for renovation.

Superintendent Fred Butcher said an alternative plan for providing meals to the students during that time is in progress.

Students may be served cold meals such as sandwiches for part of the week and they would work out a way to provide hot meals at least three days of the week, he said.

“Hot meals may not be every day,” Butcher said.

Additionally, the board discussed plans to rebuild the guard house at the entrance to campus. Within it, security monitors would be installed that would allow the campus guard to monitor what’s happening all around the high school and middle school — not just the gate.

Two sets of vehicle barrier gates would also be installed with pushbutton controls in the guard house, one for the entrance to campus and one for the exit.

The new security features would also be attractive with message board signs out front so that students would feel safe and visitors would feel welcome, school officials said.

School officials expect approximately $3 million of the updates to the old high school to be reimbursable from CARES Act funds while the bulk of the project is being financed through a combination of a 3 mil tax levy and Trust Certificates.

The district is slated to receive a total of $31 million in the COVID relief money from Elementary and Secondary School Emergency Relief funds, or ESSER funds, established by the CARES Act in phases with $2.4 million received in ESSER I, $9.7 million in ESSER II and nearly $22 million in ESSER III.

However, the funds are not deposited in a district account for them to use freely.

Ernest “Tony” Fields, public engagement coordinator for NASD, said districts are required to use available funds to make purchases and then request reimbursement of those funds spent on allowable expenditures.

Per spending regulations, a portion of ESSER funds is earmarked for school building needs that “reduce risk of virus transmission and exposure to environmental health hazards” and for performing HVAC and other improvements to “improve the indoor air quality” of existing facilities — but it cannot be used for building the new high school.

“The government can be very picky when it comes to how this money should be spent. Everybody thinks this money is just given to us but it’s not. Everything has to be accounted for,” board member Dianne Bunch said.

In other matters during Friday’s special called meeting of the Natchez Adams School District, the board unanimously approved the purchase of two school buses for $91,300, which officials said should be reimbursable by ESSER because it allows students to social distance on bus rides.

While the district has a contract with Eco Ride to transport students to and from school, they own four buses of their own — soon to be six — for special activities like field trips and away game transportation outside of the contracted bus service.