ACCS to host Kirk Academy in MAIS Class 4A Semifinals 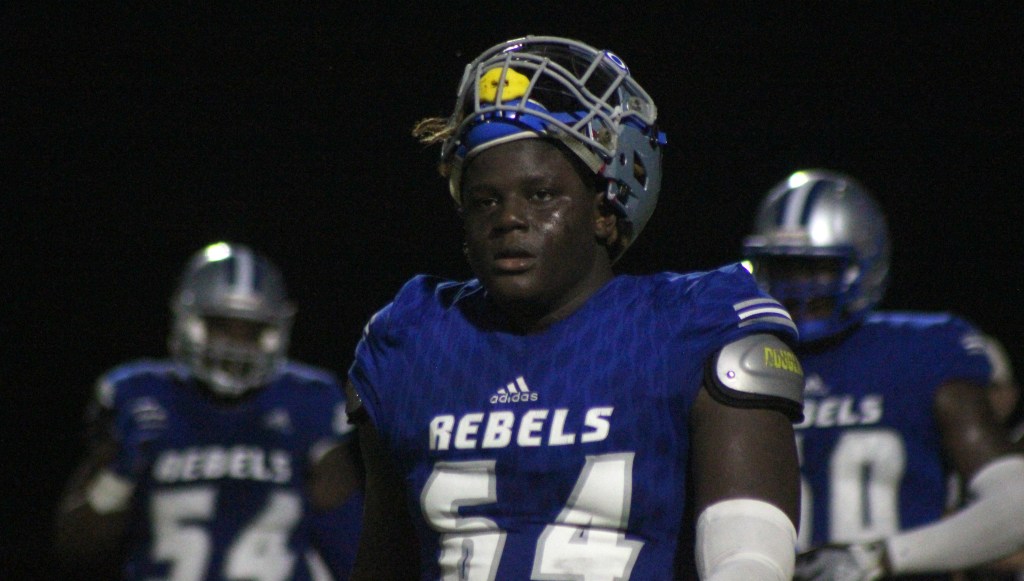 ACCS senior lineman Kyron Barnes walks off the field in a game against St. Aloysius. Barnes will play alongside his brother Kamron Barnes in their semifinal matchup with Kirk Academy Friday at 7 p.m.(Hunter Cloud | The Natchez Democrat)

NATCHEZ — Adams County Christian School will look to advance to yet another MAIS football state championship game when the Rebels play host to the Kirk Academy Raiders in the Class 4A Semifinals Friday at 7 p.m. at Bobby Marks Stadium.

Last Friday night, ACCS, the No. 2 seed and District 3-4A champion, scored 27 unanswered points to take care of the No. 10 seed Riverfield Academy Raiders 41-27 while Kirk Academy, the No. 11 seed, pulled off yet another road upset win, this time rallying to stun the No. 3 seed Brookhaven Academy Cougars 45-38 in overtime.

The Kirk Academy Raiders from Grenada (7-5) racked up nearly 500 yards of total offense in their upset win over the Cougars — 279 yards on the ground and 219 yards in the air. In the first round, they upset District 1-4A rival and No. 6 seed Marshall Academy in a defensive-minded game 7-6.

As for what ACCS will be working on in practice this week in preparing for Kirk Academy, Rebels head coach David King said, “Any and everything. It’s the semifinals. Everybody’s good. We’ve got to fine-tune everything. It’ll be a long week. You get this close and the work gets more intense. We’ve got to be organized and we’ve got to cover all our bases.”

King added that while most of his assistant coaches have been here, many of his players have not and that they’re going to have to condense everything down to four practices.

“The weather is great and we’re excited to have another opportunity to coach these young men,” King said. “I get my joy out of being with these kids Monday through Thursday. I’m just thankful for another week of practices with these fine young men.”

A pair of KA seniors, running back AJ Wren and quarterback Colberth Hathcock, led the Raiders’ offense. Wren had his way with the Cougars’ defense in the first half and again late in regulation and in overtime. Hathcock, a Meridian Community College baseball commit, came up with some big plays when they needed them.

“They’re going to be a very good opponent. They have one of the better running backs in the state (Wren). They have a good high school quarterback (Hathcock). They’re well-coached. Bottom line is they’re playing in the state semifinals and the other teams are in the deer stands. Which tells you they’re good.”

This Kirk Academy team is sort of like the ACCS team that entered the 2018 Class AAA Playoffs as a No. 14 seed and ended up winning the state championship.

“Teams get hot at the right time. They beat two really good teams,” King said. “They’ve got an outstanding running game. Defensively, they’re going to be very, very solid. Offensively, they have a running back that makes people miss and is very elusive. Both teams are evenly matched. We’ve got the advantage that we’re home. Their head coach (Mike Beagle) may have an advantage on me. There you go.”

King said what concerns him the most about the Raiders is that they’re playing their best ball right now.

“They’re hungry. And they appear to be healthy. And we’re not,” King said.

If ACCS is to defeat Kirk Academy, it has to cut down on penalties. In last week’s win over Riverfield, the Rebels were penalized 11 times for 110 yards. And they will have to win the turnover battle.

King said that the Raiders are not coming down to Natchez just to play, but to win. And they had a big crowd make the trip from Grenada to Brookhaven for their big win over the BA Cougars.

“You can tell they’re playing with a lot of confidence. They looked really well-coached. We played our best game last week and we have to play better this week,” King said. “Our assistant coaches have already put in a lot of hours this week. I feel good that we’re playing at home.”

King said that he expects the atmosphere at Bobby Marks Stadium this Friday night to be “electric.”

“We’re the last one in this area to play. It’s terrible to say, but usually we are the last one in the area to be playing,” King said. “I hope the other teams come out and support us just as we would them. Hopefully it’s a big crowd. The assistant coaches and players are ready for this. I’ve really enjoyed this year. You never know when it’s going to be your last year to coach. I’m getting up there. I’m just going to enjoy the moments with these men.”