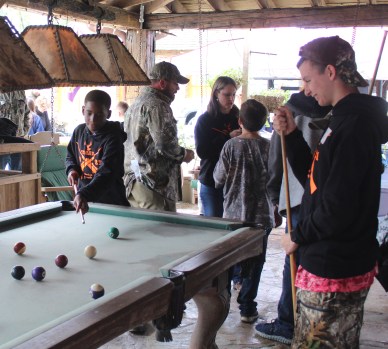 Kids play a game of pool after eating freshly smoked boudin, sausage, chicken and baked beans. In the middle is King Scott, at right is Ethan Lilley. (Hunter Cloud | The Natchez Democrat) 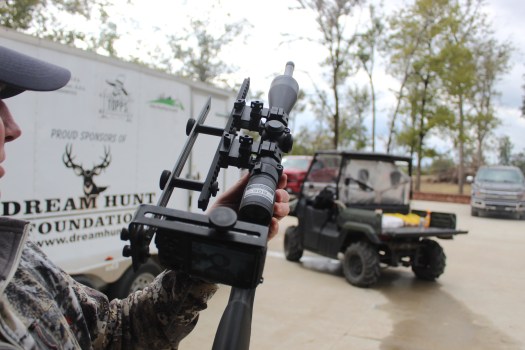 This is the setup hunters have for their rifles. A camera is behind the scope to help aim and to help record the moment. (Hunter Cloud | The Natchez Democrat) 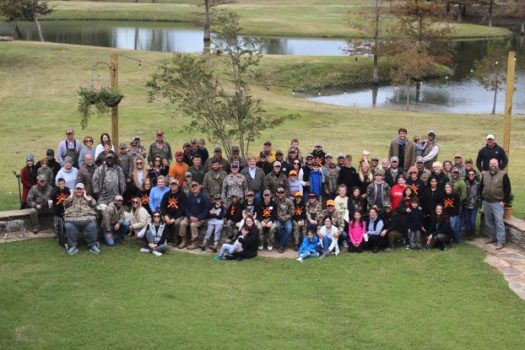 Volunteers, families and kids gather for a picture at Rifle Point after a successful morning for their dream hunts. (Hunter Cloud | The Natchez Democrat) 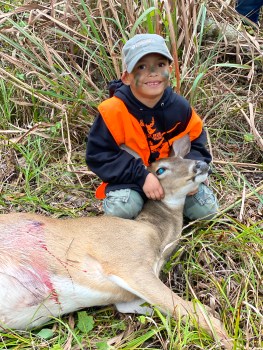 Samuel Whatley holds up the head of his deer. He killed a doe Saturday morning on a youth hunt put together by Dream Hunt’s Miss-Lou Chapter. Scott McLemore was his guide. (Submitted Photo | Scott McLemore) 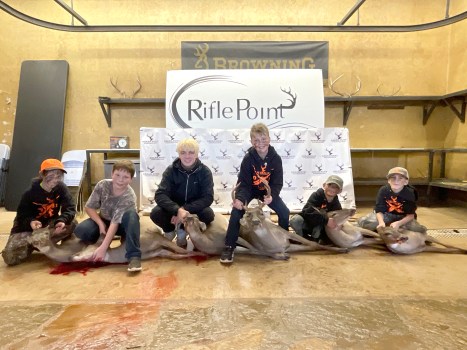 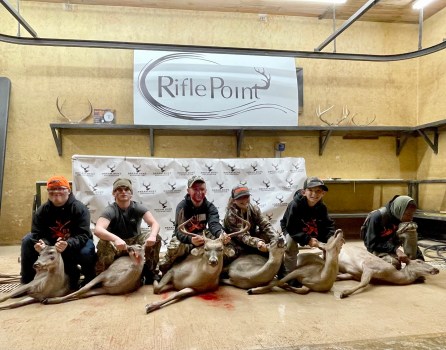 They had to get special permission from the Louisiana Department of Wildlife and Fisheries because youth rifle season ended before the weekend. A wildlife officer was at Rifle Point, which served as the headquarters for the dream hunt. By lunch time, six of the 12 kids were able to kill their first deer. By nightfall, six other children killed their first deer including a monster buck taken by Ethan Lilley on Giles Island.

Dream Hunt was founded in the spring of 2013, the foundation serves children who have special needs or are underprivileged to offer them a hunt of a lifetime. Brothers Jace, Samuel and Jayden Whatley  lost their dad in August. All three of them harvested their first deer Saturday morning.

Jace, who is from Shreveport, was sitting in a box stand at day break. He looked out and saw a doe walk in front of the stand. To his right, a couple of bucks stood with some does. Then an older buck stepped out, it was an eight point.

“We moved the gun and I had to aim my cross-hairs on him,” Jace said. “I pulled the trigger and the buck ran off. We started looking for him but we lost the blood trail so we had to call someone with a dog to find him. I was so excited when we found him. I’m going to keep hunting.”

His first deer was the biggest taken by the group of kids. Mclemore carefully caped the neck and head out and put it on ice after cleaning the deer so it could be mounted.

Kids came from all over the state of Louisiana to hunt, Mclemore said. Guides for the kids were from Concordia and Catahoula Parish. He took Jace’s younger brother Samuel on a hunt at his property where he killed a doe.

“We got up there and right after daylight we saw deer, raccoons and hogs,” Samuel said. “I had the spikes get out of the way to take the shot.”

“It was so much fun. It was fun to be around people who are getting this opportunity,” Mclemore said.