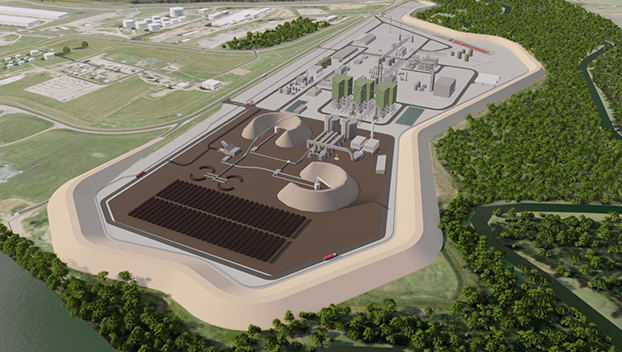 The above drawing shows the concept for the new Bayou Fuels refinery. Construction is slated to start in 2023. (Submitted photo)

The $1.5 billion project is expected to break ground at the Belwood Industrial Park as early as 2023 and could employ as many as 100 people directly as well as 300 to 400 people indirectly with outside and support jobs such as CDL drivers.

Velocys has entered into its first offtake agreement for the sustainable aviation fuel, or “SAF,” to be produced at the planned Bayou Fuels biorefinery with Southwest Airlines Co., company officials announced Wednesday.

In addition, Velocys has also entered into a Memorandum of Understanding with International Consolidated Airlines Group S.A., which includes British Airways, Aer Lingus and Iberia among others.

Natchez Inc. Executive Director Chandler Russ said the two contracts together are worth approximately $3 billion, which is enough to cover the cost of producing the fuel and prove the company will have the needed cash flow to continue financing the project.

“It’s a big day for Bayou Fuels,” he said. “This is the final leg needed to advance the project to commercial viability.”

Velocys agreement with Southwest covers the airline’s purchase of an expected 219 million gallons of SAF at a fixed price over a 15-year term starting as early as 2026, when the biorefinery is scheduled to begin commercial delivery of fuel.

After blending, this will enable approximately 575 million gallons of net zero SAF, which is a fuel with a zero-carbon intensity or lower on a lifecycle basis.

The offtake agreement covers two thirds of the facility’s planned output and has the potential to generate multi-billion revenues over the life of the contract, company officials said.

“Today’s announcement is a major milestone for the Bayou Fuels reference project and further strengthens our conviction in the important role sustainable fuel will play in the future of the aviation industry,” said Henrik Wareborn, CEO of Velocys. “It is very encouraging to see Southwest make such a strong commitment to using fossil free fuel as part of its environmental sustainability plan and to see Velocys technology performing a central role in making this possible.

“This unique long dated offtake, encompassing fuel purchases and sales of greenhouse gas credits, underpins the financing of the construction capital for the project. This agreement shows that commercial scale demand for SAF can be satisfied already by the middle of this decade and that Velocys plays a pivotal role in enabling this.”

Alongside offtake agreement with Southwest Airlines, Velocys’ MoU with IAG covers the purchase of an expected 73 million gallons of SAF at a fixed price.

After blending in accordance with U.S. regulations, this would produce the equivalent of 192 million gallons of net zero SAF during the term of the purchase contract, which will last for 10 years beginning in 2026.

This represents another third of the facility’s planned annual output and complements the binding offtake agreement with Southwest Airlines for the remaining two thirds annual output.

Velocys and IAG intend to convert the non-binding MoU, which includes an option for IAG to invest in Bayou Fuels project development phases, into a definitive offtake within the next six months, company officials said.

Once the agreement is finalized, Velocys will have secured long-term customers for 100 percent of its production at the Natchez facility.

“We are delighted that IAG, our partner for many years through our work with British Airways, intend to purchase a large volume of SAF from the Bayou Fuels project,” Wareborn said.