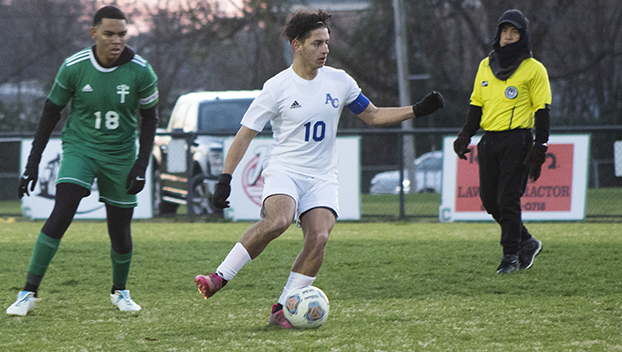 SUMMITT — Adams County Christian School graduate Juan Boteo played in nine games his  freshman season at Southwest Mississippi Community College. While he did not score any goals, he felt like he improved as the season progressed.

“I was really excited about getting playing time. It was a nice experience,” Boteo said. “I learned a lot from my teammates. I tried to learn as much as I could for the next season. My goal was to get better every day.”

Soccer games were typically played on Friday, so the three days at the beginning of the week were spent training. One of those days the players would have a 6 a.m. track practice where they would run a mile, two miles or bleachers. After the practice, Boteo said he would take a shower and have breakfast in the cafeteria by 7:30 before going to classes at 8 a.m.

From 8 a.m. to 11 a.m. he would be in classes before having lunch with the team. In the afternoons, they would have practices around 3 p.m but sometimes it could be 2 or 4 p.m. On bad weather days, the team practiced indoors at about 7 p.m., he said.

Sunday and Wednesdays were weight training days. He said he balanced academics and athletics.

“We are always encouraged to put academics first,” Boteo said. “We have to do three study hall hours after practice. If you don’t do those study hall hours then you have to do more running. My favorite class is General Psychology because I found everything interesting. I liked it a lot because it talks about the brain and our emotions.”

Making the move from playing high school soccer to college soccer was not easy, he said. The players are better, the teams are better and the game moves quicker, he said.

The team prepared for this change by doing a lot of quick session drills during preseason practice. Southwest had two preseason games which helped players acclimate to the pace of play. Additionally, he said they watched a lot of film.

“I had to adapt to it; every mistake counts now,” Boteo said. “In high school if you made a mistake you could recover. Now if you make a mistake it can cost you a game.”

Pearl River Community College visited Southwest in a soccer match which the Bears lost 4-0. Boteo said it was his favorite game despite the loss because “I had a pretty decent game and it was a challenge for me. I like it a lot,” he said.

In the off season, he said he hopes to work on his speed of play and being a starter on the team. He has been working hard to do so.

He said the first week of college he felt kind of homesick and distant from his family. However, his team helped by forming a family bond through time spent together outside of practices and games, he said.

When Boteo signed to play at Southwest Mississippi Community College, he was focused on playing soccer and not concerned about his major. He had decided to study welding for his major.

“I can see myself doing it in the future,” Boteo said.