Natchezian part of Salute to Service at NFL game 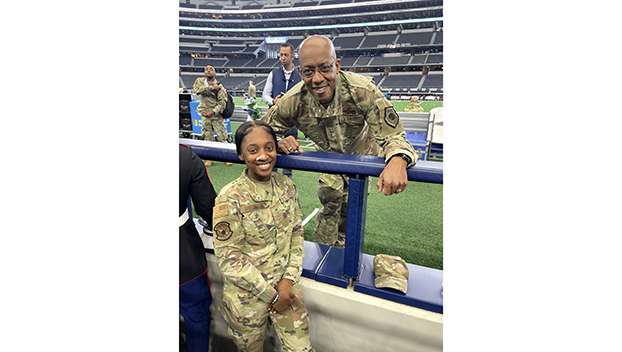 DALLAS — Natchezian Areonia Robinson helped carry out the American Flag during the Dallas Cowboys pregame ceremonies last weekend. A Mississippi State alumnae, she earned a degree in kinesiology before joining the Air-Force.

She is currently stationed at Dyess Air Force Base in Abilene,Texas, and Robinson said the opportunity to participate in the ceremonies is thanks in part to a very social commanding officer. Her commander learned that the Cowboys were looking for military personnel to carry the flag and sent an email to his airmen.

“No one responded because they weren’t interested or didn’t like the Cowboys. I wanted to go because it was a great opportunity, and I’ve never been to an NFL game,” Robinson said.

Servicemen from all branches of the armed forces carried the American flag out as it covered the entire football field. They had to run the flag out in time with the music, she said.

At halftime, they stood at attention as medal of honor recipients were recognized. Lee Greenwood sang God Bless America at midfield. “It was super cool,” Robinson said. “When we got out on the field there were people in the stands thanking you for what you do. It is cool. I like when people tell me ‘thank you for your service.’ When I got there at 4 a.m. it was empty but when I went back out before the game it was packed. I was like ‘wow.’”

Ever since 10th grade, she had told her grandmother she wanted to go into the Air Force. By the time she graduated high school, a year early, she enlisted but was shy of the required weight. Gibson said she had wanted to go to the Air-Force before going to school at Mississippi State, but the plan was turned around. “I told her the Lord will make a way for you to go to college,” she said.

“She went ahead and went to Mississippi State, got her weight up and enlisted. She probably got a better ranking by graduating college,” Gibson said. “We are so proud of her. She is very determined. When she makes up her mind to do something she does it. I’m very proud that she got to carry the flag. Not everyone gets that opportunity. We are very proud of her.”