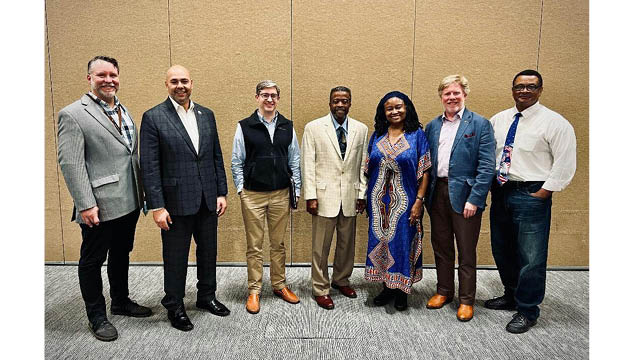 NATCHEZ — A volunteer committee working to create a monument to the Natchez U.S. Colored Troops have narrow potential sites for the monument down to an initial eight.

About 50 Natchez residents attended in person the first community meeting of the Natchez U.S. Colored Troops Monument Project Committee Wednesday at the Natchez Convention Center. Another 20 or so attending the meeting virtually and were able to ask questions and participate online.

The monument will honor the almost 3,000 Natchez area men who served in the U.S. Colored Troops.

Robert Pernell is chairing the committee, which consists of several subcommittees, including site selection, design, research and history, finances and fundraising and public relations, marketing and promotion. Each subcommittee chairperson provided a report on its work.

Based on the response and questions from those attending, the location of the monument garnered the most interest.

Devin Heath, who is executive director of Visit Natchez, is the chair of the committee’s subcommittee site selection. He said a number of factors, including visibility, historic significance and logistics were considered when coming up with the eight locations, which include:

–Forks of the Road, located at St. Catherine Street near Liberty Road.

–Cemetery Road, near Natchez City Cemetery and the site of Fort McPherson, which was established and built by the troops.

–near Zion Chapel AME Church at MLK and Jefferson streets.

–Martin Luther King at B streets.

–the vacant lot behind Pig Out Inn and across from Bontura on Broadway.

–at the Natchez Visitors and Reception Center.

A number of residents commented on their opinions about where the monument should be. Betty Lou Hicks, who is a tour guide, asked the site committee to remember accessibility when choosing a site.

Natchez resident Lee Ford told the committee he is in favor of the monument, but asked that the monument to the confederate soldier, located in Memorial Park, be moved.

Lance Harris, who chairs the design subcommittee, said his committee has not decided on how or who will design the monument, but is still gathering information about similar monuments around the nation, as well as potential features of the monument, like interactive technology.

Deborah Fountain, who is in charge of the research and history committee, provided an overview of the Natchez soldiers who served and urged Natchez residents to check their genealogy to identify if they are related to one of the soldiers.

“It could be that as many as 90 percent of the black families in Natchez could be descendants of these soldiers, but not know it,” she said.

In all, 209,000 Black men served in the U.S. Colored Troops, helped end slavery and kept America united until one flag, Fountain said.

Natchez Mayor Dan Gibson, who first proposed the monument, said Natchez owes a debt of gratitude to these 3,000 soldiers, who he said have been ignored for 150 years.

“It’s time to correct that,” Gibson said. “It’s important to make sure we are people who tell the whole story regardless of what that story is. That’s why we are so passionate about Forks of the Road…We want Natchez to be a known as a city where harmony is celebrated and unity is exemplified.”