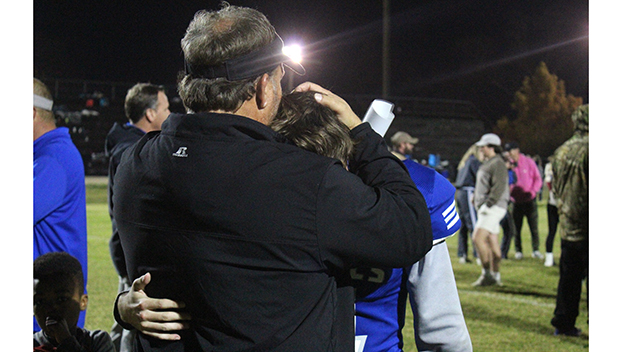 NATCHEZ — Raiders fans gathered and cheered as their team celebrated a semifinal win and punched a ticket to Jackson when Kirk Academy upset ACCS 16-7 Friday night.

About 20 yards away, a hushed silence fell as head coach David King addressed his players.

“Unfortunately this is a part of life gentlemen,” King said. “I wish I could take away this pain from you, but I can’t.”

He told senior defensive back Colin Cauthen “I wish I could take this pain away,” as he hugged the crying Rebel. In Cauthen’s final game at ACCS, he made two interceptions to give the Rebels a chance.

Cauthen reflected on the fact that he’d just played his final game on the field he first took in the eighth grade.

“It is crazy to think I’ll never play on it again,” Cauthen said.

Cauthen was on the field when quarterback Coleman Carter made a desperation heave towards the Rebels sideline. AC had a wide receiver in the area who was brought down by the defensive back well before the ball reached its intended target. Desperate pleas from assistant coaches for pass interference fell on deaf ears.

The turnover on downs was the ultimate blow to the Rebels’ season as Kirk Academy went into victory formation. Cauthen said he saw the ball fall incomplete.

“My heart just broke,” Cauthen said. “It is like nothing I have ever felt before,”

Early in the game, Cauthen made a big defensive play when he caught a deflection from D.K. McGruder. He secured the ball, turned and took off up the field. He said when he started returning the interception he thought he would score.

In the third quarter, Kirk Academy drove down the field when they threw in the direction of Colin Cauthen who got his second interception of the night at the three yard line. He said the

quarterback had rolled out to scramble.

“I saw him scramble out and the ball went up in the air,” Cauthen said. “ I thought ‘I have to make a play one last time.’”

King said the coaching staff was out coached by Kirk Academy and the team was outplayed.

Their game did not get off to a good start. On the first play of the game, AC was called for 12 men on the field. It would be indicative of how their game would go as they were penalized 14 more times for a total of 130 yards. Offensively, they struggled to get the ball moving with 208 total yards.

J.J. Claiborne had 23 rushes for 99 carries in the game. Coleman Carter had six rushes for 22 yards and threw for 67 on six completions. Receiver Jamar Kaho had AC’s only touchdown on a 12-yard pass from Coleman. The Rebels had four turnovers, two interceptions and two fumbles. One of those interceptions was a 70-yard pick six for the Raiders which gave Kirk a nine point lead.

King’s men went 8-3 and were undefeated in district play.

“I was proud to coach this group,” he said. “They are a great group of men. I wish I could take that pain away from them but I can’t. I thought we prepared hard all week but we didn’t have them as ready as we needed to and it is on us.”