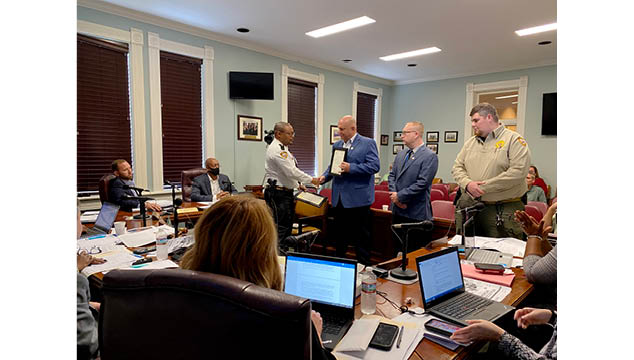 Cutline: From left, Adams County Sheriff Travis Patten present letters of recognition to Concordia Parish Sheriff David Hedrick, Concordia Parish Sheriff’s Investigator Stephen Lipscomb and Adams County Sheriff's Office's Blake Matthew for their help in sharing information and locating the body of a missing Natchez person, Bill Calvin, which led to an arrest of a murder suspect, Tayshon Holmes. Patten presented the certificates to the three at the Monday meeting of the Adams County Board of Supervisors, each of which thanked Hedrick and his department for its spirit of cooperation. (Jan Griffey | The Natchez Democrat)

NATCHEZ — At the recommendation of Emergency Management Director Robert Bradford, the Adams County Board of Supervisors agreed to let expire any remaining COVID requirements and return back to normal operations on Dec. 1.

“We agreed we would roll these requirements back after numbers got under 50 percent,” Bradford said. “Our numbers are going down. I don’t think these requirements need to continue. People are continuing to get vaccinated and are doing what they need.”

The county did not have a mask mandate, but recommended wearing masks. In addition, Bradford said the roll back of requirements would include going back to “normal” on the number of people who can gather at building capacity indoor and outdoor events.

All agreed to removing the COVID recommendations except District 4 Supervisor Ricky Gray, who said he fears a winter surge in cases.

“As long as COVID is around we need to let people know it’s still here and it’s not going anyplace,” Gray said. “I don’t want us to send the wrong message.”

In other business, Chandler Russ, executive director of Natchez Inc., gave an update on a number of projects in the works in Natchez.

“Velocys and Bayou Fuels has had extremely good fortune of late,” Russ said.

The company, which plans to construct a one-of-a-kind facility at the site of the old Belwood Country Club in Natchez, has entered into its first agreement with Southwest Airlines for its sustainable aviation fuel. Southwest has agreed to purchase 219 million gallons of sustainable aviation fuel, which will be produced at its Bayou Fuels biorefinery in Natchez, at a fixed price over a 15-year term, beginning in 2026, when the facility expects to begin commercial delivery.

A news release from the company said the agreement covers two-thirds of the facility’s planned output and has the potential to generate multi-billion revenues over the life of the contract.

“This contract puts them in a significant position to move forward with Bayou Fuels,” Russ said.

Russ also discussed in vague terms a development being considered for U.S. 61, south of Natchez near Roux 61.

He said details are yet to be finalized which prohibit him from providing information in a public setting, but he said, “It’s a $20 million development that the county will be extremely proud of.”

Also at Monday morning’s meeting, Timothy Smith, a senior manager of Horne LLP of Ridgeland, spoke to the supervisors about managing the almost $6 million or so in American Rescue Plan money the county will receive.

Smith said his firm has helped government agencies manage about $90 billion in federal funds. He warned any ARP monies the county spends will undoubtedly be scrutinized by the federal government and is likely to be audited.

Smith said his firm works to make certain proposed expenditures meet the federal requirements for use of the funds and will handle detailed documentation of expenditures for the county.

Supervisor Gray said one of his primary concerns is finding money to repair Morgantown Road. Smith said he expects legislation to be passed to allow for the use of 30 percent or $2 million of the county’s COVID rescue funds to be spent on roads and bridges.

The supervisors agreed to take Horne LLP’s proposal under advisement. No cost for managing those funds was discussed at Monday’s meeting.