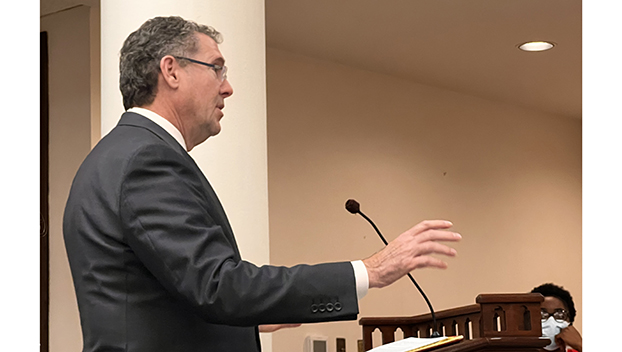 Former Congressman Gregg Harper speaks to the Natchez Board of Aldermen on Monday on behalf of Watkins & Eager lobbying firm. (Sabrina Robertson | The Natchez Democrat)

NATCHEZ — A $1.2 trillion infrastructure bill signed into law Monday by President Joe Biden is a “huge benefit to Mississippi and to Natchez,” J. Manning McPhillips of Watkins & Eager said to the Natchez Board of Aldermen during their special-called meeting on Monday.

In addition to establishing the Interstate 14 corridor — which is planned to loosely follow U.S. 84 in Natchez as it follows a line across Central Texas to Augusta, Georgia — the bill also holds funds earmarked for port, airport, roadway and bridge improvements.

The lobbying firm plans to work at bringing some of that money and more here and complete a list of priorities presented to them by Natchez and Adams County.

Priority number one, which did not make it into the bill that President Biden signed, is the Morgantown Road resurfacing project, officials said.

It has been nearly 20 years since officials first started talking about resurfacing the dangerously narrow, flood-prone road. McPhillips said they’re not giving up the fight for Morgantown Road until it is funded.

“As we look to the future, Morgantown continues to be the top priority,” McPhillips said. “If for some reason, the federal government does not do a big appropriations bill at the end of the year … then we will shift our attention back to the state. MDOT has received a considerable increase in the bipartisan infrastructure bill so we’ll be working with them as a backup. If that is not possible then we will work with your legislative delegation. We’re taking an all-of-the-above approach to Morgantown Road until that project gets funded.”

Former Congressman Gregg Harper said because Morgantown Road has been in consideration in both House and Senate bills already, the “earmarked” funds could still be there.

“We actually got $2.4 million the House bill, which later got stripped out. We got the same $2.4 million listed in the Senate bill and it’s still there,” he said. “If we get $2.4 million out of this appropriations bill later down the line, that’s a huge step forward. … If we get it, we’re good. But if we don’t, we still have options.”

In addition to the I-14 designation, another big success that Adams County had this year involves Forks of the Road, which is now a National Park Service site.

McPhillips said they helped garner $400,000 in “acquisition dollars” for Forks of the Road and are currently working towards getting another $538,000 in an appropriations bill by the end of this year and an additional $598,000 next year. Now that the city has donated its portion of Forks of the Road to the park service, the money would allow NPS to purchase the remaining parcels of land from private landowners and further develop the site.

McPhillips said “we feel very good” about the appropriation bills after the Forks of the Road project received support from all facets of government from the local level up to Washington D.C.

The firm also worked with the Mississippi legislature towards a $1 million appropriation for the Belwood Levee project and the congressional delegation for the Natchez Adams County Airport runway project, which is now fully funded.

In regard to the airport, McPhillips said they’ve now turned their attention to procuring funds for rehabilitating the airport terminal building. Gibson said this would improve the airport’s chances of recruiting a commercial airline tenant.

In addition to the Morgantown Road project, officials also discussed needs with the city’s drainage. It’s possible the City of Natchez could use part of the funds available in the American Rescue Plan Act to finance the mitigation of drainage issues, which officials said have been an ongoing problem throughout the city for a long time.

“We have very loose windblown soil on this high bluff,” Natchez Mayor Dan Gibson said. A few of the problem areas he named were Concord, Roselawn, North Natchez and along the Natchez Bluff. He added, “It really is all over.”

Gibson suggested conducting a city-wide study of these drainage issues.

Aldermen Billie Joe Frazier asked whether the county should be involved in the study, making it a county-wide study. Gibson said the first step would be identifying opportunities for funding it.

“There are a couple of different funding options for it,” McPhillips said. “We want to look at your ARPA (American Rescue Plan Act) money and see if this can be handled with those dollars and the U.S. Corps of Engineers and other federal resources — again, taking an all-of-the-above approach as soon as we understand what those projects are.”

Also included with the list of legislative priorities is lighting the Mississippi River bridges, Gibson said.  The estimated cost to light both bridges with animated lights capable of changing color for aesthetic purposes is $5.7 million.

Other priorities on the list include an assessment of the city’s broadband needs, workforce development and renewal of the Mississippi film tax credits.

In other matters during Monday’s meeting, Megan McKenzie was sworn in as the Natchez City Clerk in place of Servia Fortenberry, who resigned this month.

McKenzie, known as Megan Edmonds before re-marrying, served as Natchez City Clerk from February 2017 through August 2018.

She left the position to work in the Adams County Circuit Clerk’s office and partnered with her mother, Charlotte Marshall, at Ja’Nel’s and Buttercup Bakery.